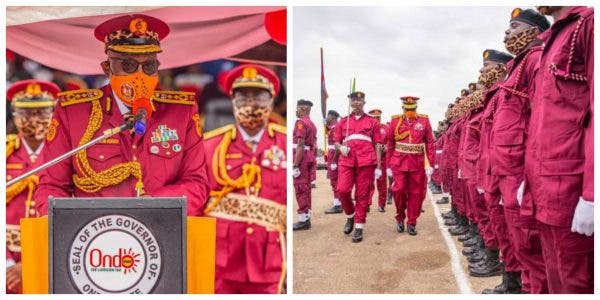 Governor Rotimi Akeredolu of Ondo state on Wednesday said state governors will not be responsible for the funding of the Community Policing of the Federal Government, being championed by the Inspector General of Police.

Akeredolu who is also the candidate of the All Progressives Congress (APC) for the forthcoming gubernatorial election in Ondo also ruled out the possible collapse of the South West regional security outfit, Amotekun under the new policing strategy.

The Deputy Inspector-General of Police in charge of Research and Planning, Adeleye Oyebade, had Tuesday said that all other security arrangements in the country would fall under the community policing arrangement of the federal government.

“I am going to tell you straightaway. By the time the community policing strategy and implementation come fully into operation, everybody will follow suit. Everybody will join us and follow what we are preaching and what we practice.”

But responding Oyebade’s position, Akeredolu said community policing remained the baby of the federal government, while Amotekun on the other hand if the baby of the South West governors.

“I am sure that they are taking this thing too far. Governors will have to pay? We have discussed this thing before and we told them it is not going to be possible. Are you increasing our allocations? Which state governor will accept that? Other states might say, ‘Yes, we will pay’, but we will not pay.

“Let’s be fair to ourselves, we are running a federal system. Where is that money going to come from when we are struggling to pay salaries? Nobody has ever come to us to say we will pay salaries (of community policemen) anyway and if they come, we will write to say, no, we don’t have extra money to do that.

“We have a law that sets this up. If the DIG feels otherwise, there is always a place for us to ventilate it. We are not afraid of this. The law says Amotekun will operate under its own law; it is not going to be subsumed under any setup. No.

“We will work together, it is collaboration, not that it will be subsumed. The law is there and if anybody finds a fault in that law, we can go to court and ventilate whatever position in it. The DIG is totally wrong, Amotekun will not be subsumed under the community policing”, the governor stated clearly,” her said.