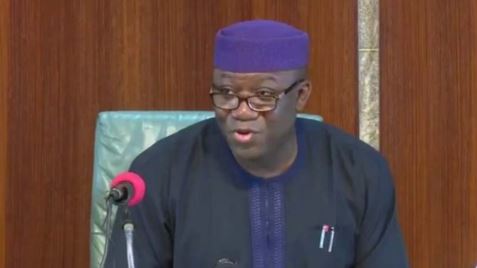 The Chairman of the Nigerian Governors’ Forum (NGF) and Governor of Ekiti State, Dr Kayode Fayemi on Sunday lamented what he described as the discontent, hunger, and anger in the country.

His views may not be unconnected with ongoing nationwide #EndSARS protests.

The governor noted that he and his colleagues are worried at the present state of events in the country.

He however expressed the governors’ readiness to work with other stakeholders to find a lasting solution to the issues.
Speaking at a Special Thanksgiving Mass held at St. Patrick’s Catholic Cathedral, Ado Ekiti as part of activities to mark the second anniversary of his administration in office, the governor however expressed optimism that there will be light at the end of the tunnel.

Security was beefed up in the church premises in view of the #EndSARS protest, which entered the third day in the state.
Also, the Catholic Bishop of Ekiti Diocese, Most Revd Felix Ajakaye, called on the protesters to cease fire to allow the Federal Government take action on their demands.
Fayemi said, “There is a lot of anger in the land, there is a lot of hunger in the land, pent-up emotion. There is disillusion in the land. As a young man who spent much time in the barricades protesting bad governance, I can understand what is going on now.

“Myself and my colleagues are concerned and we are committed to reforms not just about SARS because we will be making a mistake that the general disaffection in the land is all about SARS.
“Like Your Lordship (the Bishop) had said, the government should be allowed to address the problems that have cropped up,” the governor said.