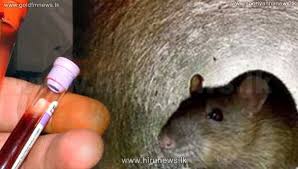 At least 70 people have died while over 6,000 others on danger list as rat fewer continues to unleash health challenge in Sri-Lanka.

The Epidemiology Unit of the Health Ministry said on Friday that while the coronavirus pandemic is on global rampage, rat fewer had taken the centre stage in Sri-Lanka.

According to the official statistics, 6,096 patients were infected with rat fever as at September, while the highest number of patients was reported from Ratnapura in south-central Sri Lanka.

According to the Epidemiology Unit, an increase in the number of patients was reported in January, February and May.

In 2019, a total of 6,021 rat fever patients were reported across the country and the most vulnerable were farmers, drain workers, canal cleaners, and persons who swam and played in contaminated water.

According to medical officers, the symptoms for rat fever include fever, chills, conjunctival suffusion, muscle tenderness, headache, and a decrease in passing urine.

Those suffering from these symptoms should seek medical treatment immediately, the Epidemiology Unit said.