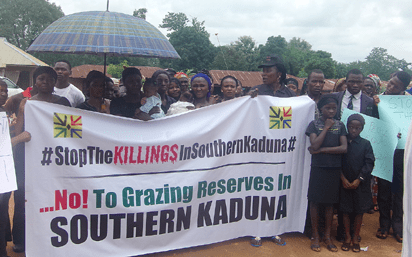 ‎‎Disturbed by the continued killings in Southern Kaduna, the Christian Association of Nigeria (CAN), Kaduna State chapter on Sunday staged an indoor protest, calling for an end to the killings.

Prayers were also offered during the event, which held at the ‎Evangelical Winning All Church (ECWA) Narayi. ‎

‎Worshippers at the event, tagged ‘Black Sunday’, were clad in black clothes.‎

‎Members of the Christian body displayed banners bearing messages such as‎ ‘Stop the killings in Southern Kaduna’, ‘CAN say no to continued killings’, ‘Speak for the citizens not the bandits’, ‘Enough of the bloodshed, widows and orphans are increasing’, ‘Declare bandits as terrorists’, and ‘Government must rise to their responsibility’. ‎‎

Various pastors prayed against the ongoing killings in Southern Kaduna at the event.

‎The President of the Kaduna Baptist Conference of the Nigeria Baptist Convention, Revered Ishaya Jangado, said Christians should not be silent in the face of injustice.

Rather, he said they should always seek the face of God in prayers. ‎

Chairman of the Kaduna State chapter of CAN, Reverend John Hayab, said the prayers will hold every Sunday in August.

See also  Killing of Christians: What I discussed with Trump by Buhari
CANkillingsSouthern Kaduna
0
Share FacebookTwitterGoogle+ReddItWhatsAppPinterestEmail