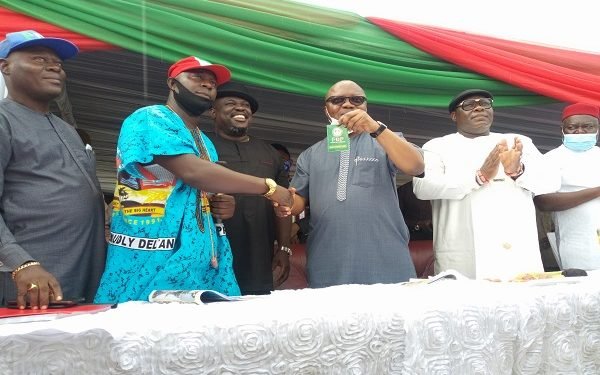 Former Governor of Delta State, Emmanuel Uduaghan on Monday finally severed his relationship with the All Progressives Congress (APC) and he returned to his former party, the Peoples Democratic Party (PDP).

Uduaghan re-joined the PDP at his Unit 1, Ward 6, at Abigborodo, his country home, and was accompanied to the venue by several supporters.

“I am back to join forces with other party greats to strengthen our party, the largest party in Africa -PDP!” the ex-governor had earlier stated on his Twitter handle.

The former governor who left the PDP in the build-up to the last general election following alleged mistreatment by the party’s leadership in the state went on to contest the senatorial seat on the platform of the APC.

He had met with Governor Ifeanyi Okoya two weeks ago to fine-tune plans to return to PDP, his former base.

He also met with James Ibori, who was also a former governor in Delta State.

Uduaghan was the Governor of Delta State on PDP platform for eight years (2007-2015).

He had earlier served as the State’s Commissioner for Health and later Secretary to the State Government under the administration of Ibori.

Nigeria @ 60: Our walls are not yet broken, but there are cracks says Osinbajo