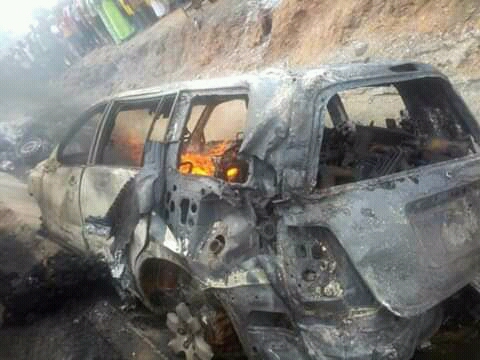 ‎T‎en persons, including a primary school pupil, died after a petrol tanker exploded in the Felele area of Lokoja, Kogi State capital‎, on Wednesday.
‎

It was gathered that the tanker lost control and rammed into oncoming vehicles before going up in flames.

The incident occurred around 8:00 am.‎

It was further gathered that some of the victims are students of the Kogi State Polytechnic.‎

Sources at the scene said emergency responders failed to attend to the fire for over one hour, a development which escalated the level of damage recorded in the ‎incident.

Meanwhile, the Kogi State government has commiserated with victims ‎of the tragic incident.
‎
“It is very sad to learn of the tragic loss of lives, many vehicles, property and other valuables in the petrol tanker fire,” Governor Yahaya Bello said in a statement by his spokesperson, Onogwu Muhammed.