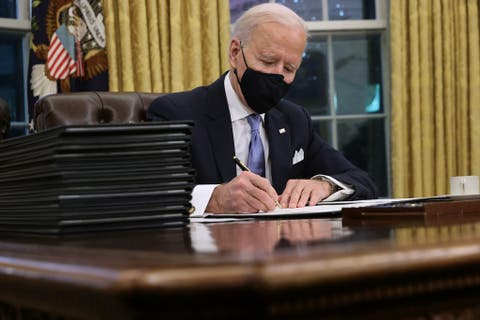 President Joe Biden is set to propose a $2 trillion infrastructure plan aimed at modernising the United States’ crumbling transport network, creating millions of jobs and enabling the country to “out-compete” China.
The first phase of Biden’s “Build Back Better” program, which he will unveil in a speech in Pittsburgh, will detail massive investment spread over eight years.

It plans to inject $620 billion into transport, including upgrading 20,000 miles (32,000 kilometers) of roads and highways, repairing thousands of bridges and doubling federal funding for public transit.

The president, whom Donald Trump tried to caricature as “Sleepy Joe” and a man without strong ideas or motivation, intends to make the bold infrastructure plan one of his flagship policies.

“He views his role as laying out… a broad vision, a bold vision for how we can invest in America, American workers, our communities,” White House spokeswoman Jen Psaki said.

The investment would be partly paid for by raising corporate tax from 21 percent to 28 percent.

The president is proposing to fundamentally reform the corporate tax code so that it incentivizes job creation and investment… and ensures that large corporations are paying their fair share,” a senior administration official said ahead of the speech.

And Biden’s speech is set to open a bitter battle in Congress, where the Democrats hold only a narrow majority and will face strong opposition from the Republicans.

The first criticisms of the plan came before Biden even gave his speech, some of it from the progressive wing of his party.

At the other end of the spectrum Republican Senator John Barrasso dismissed the plan as “a Trojan horse for more liberal spending & higher taxes.”

The coming months will test the negotiating skills of the Democratic president, a veteran of Washington politics and deal-making, and the chances of his infrastructure plan passing into law remain uncertain.