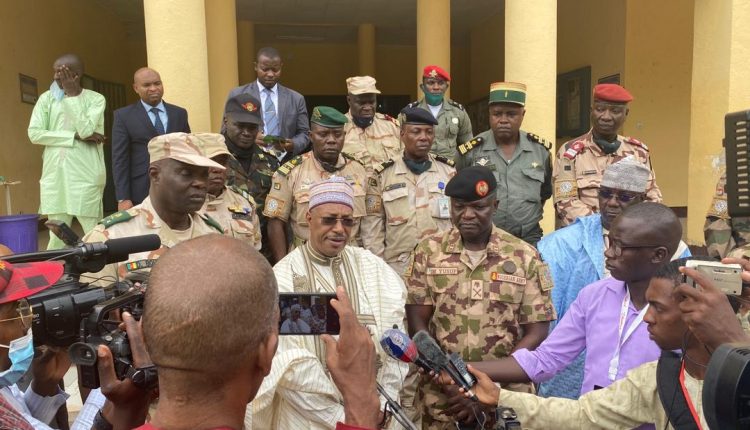 The Multinational Joint Task Force (MNJTF) In order to tackle the menace of Boko Haram insurgents has approached Cameroonian military structures for support.

Dole said: “It is pertinent to note that the operations of Sector 1 MNJTF (Cameroon) are closely linked with the operations other formations of the Cameroonian Defence Forces. These include Operation EMERGENCE by the 4th Joint Military Region and the 4th Gendarmerie Region as well as Operation ALPHA by the Rapid Intervention Battalion (BIR) all located in Maroua.

He said the purpose of the visit was to enhance synergy between the MNJTF and the adjoining national operations of the Cameroonian Defence Forces. 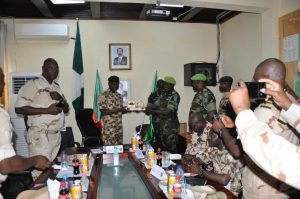 He said the Governor commended the MNJTF for stabilising and restoring relative peace to the Lake Chad Basin.

He appreciated the sacrifices of all the soldiers from the MNJTF Troops Contributing Countries and assured that the ongoing military operations will ultimately bring peace and security for sustainable development of the region.

Dole said General Yusuf, in his response, appreciated the political support and public goodwill extended to Sector 1 of MNJTF.

He said, the support had facilitated the smooth execution of non-kinetic operations, leading to the surrender of several insurgents in Sector 1 Area of Operation.

He added that the FC was emphatic on the unalloyed commitment of the MNJTF to creating conducive environment for return of Internally Displaced Persons (IDPs) and refugees to their homes of origin to pursue their legitimate economic activities.

He noted that at the Headquarters, Fourth Joint Military Region, the Commander, Major General Saly Mohamadou extolled the existing seamless synergy and collaboration among Operations EMERGENCE, ALFA and troops of Sector 1 of MNJTF.

The Commander urged the FC to explore additional areas in which the two operations can further consolidate on the operational successes recorded. General Saly expressed willingness to continue with joint operations between the national and MNJTF forces in the region.

Dole said, in his remarks, Major General Yusuf acknowledged the need for sensitisation of national forces on the imperative of non-kinetic measures as complimentary efforts to kinetic operation to ensure continuous insurgents defection.

He added that, winning public support is a tested veritable strategy for successful counter insurgency operations in the region, while urging both the national and MNJTF forces Commanders to sustain regular operational visits for better understanding and mutual benefits.