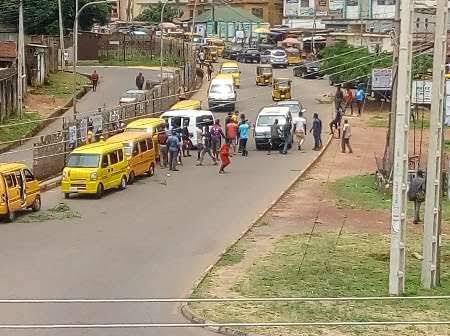 ‎An officer of the Lagos State Neighbourhood Safety Corps, Chika Nsude, has been crushed to death by a commercial bus driver.

The incident happened around the Powerline area of Iyana-Ejigbo, in the Ejigbo Local Council Development Area of Lagos State.

It was‎ gathered that Chika was riding a bicycle to his station at the Excel College in Ejigbo when the driver drove against the traffic and rammed into him.‎

Chika’s dismembered body was removed from underneath the truck and placed in a patrol vehicle, which conveyed his corpse to a mortuary.

Eye witnesses said the commercial bus driver, who was driving recklessly in a bid to avoid paying money to a union member, fled after the incident. ‎

“What we gathered was that the LT bus driver drove against the traffic to avoid paying money to a union member and in the process, rammed into an LNSC officer riding a bicycle to his beat at the Excel College in Ejigbo.

“The LNSC officer was riding beside a truck that was also on motion on the regular lane when the LT bus driver knocked down the officer and his bicycle under the truck, which crushed him to death.

“Initially, the truck driver didn’t know that the officer was underneath his truck, but the people, who saw what happened, called his attention to it.

“The incident happened at the Powerline bus stop around Iyana-Ejigbo, and when the officer was brought out from underneath the vehicle, his head had been shattered, his hands and legs were all over the place. He died on the spot,” an eyewitness said. ‎

It was learnt that the victim, Chika, was planning to get married in November this year.  ‎

Police Public Relations Officer, Olumuyiwa Adejobi, who confirmed the incident, said the police was on the trail of the fleeing commercial bus driver.