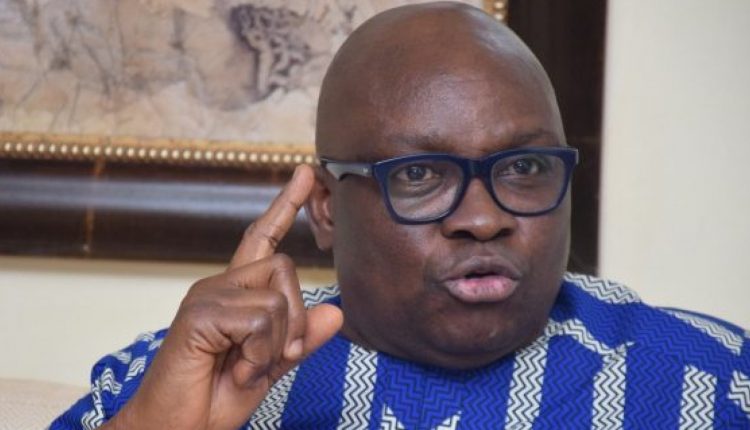 Former Governor of Ekiti State, Ayodele Fayose on Thursday declared that the country is “presently in coma and on life-support” under President Muhammadu Buhari.

Fayose said Nigeria had nothing to celebrate at 60, in view of the increasing spate of insecurity, hunger, bare-faced corruption, and bad governance.

The outspoken former governor in a statement made available to journalists by his spokesperson, Lere Olayinka lamented that the nation’s situation had never been this bad. He claimed that the present administration remained the worst in the country’s history.

He therefore demanded for the resignation of President Muhammadu Buhari, insisting that throwing in the towel would be the best Independence Anniversary gift to Nigerians.

“The government is for the people and not the people for the government. It must therefore be accountable to people. The police must also be mindful of the fact that they are part of society.

“The reality is that Nigerians are not happy with the present situation of the country. More so that this present government appears to be the worst in the history of Nigeria.

“Nigerians are not happy about the debts accumulated by this government because they can’t see anything being done with the money borrowed.

“They are angry that they can no longer go to their farms, travel on the roads and even sleep in their homes without the fear of being kidnapped, killed or raped by armed bandits.

See also  Fayose: ‘Only God will save Nigeria at the moment’

“Nobody wants Nigeria to disintegrate. Rather, Nigerians want to live their lives normally without minding which party is in government, and as it appears, living in Nigeria has been made extremely difficult by this government.

“Painfully, most of those who are desirous of leaving the country for greener pastures abroad are unable to do so because advanced countries are banning Nigerians from coming to their countries.

“The already weak shoulders of Nigerians are being made to carry too much burden and they have rights to show their displeasure.”