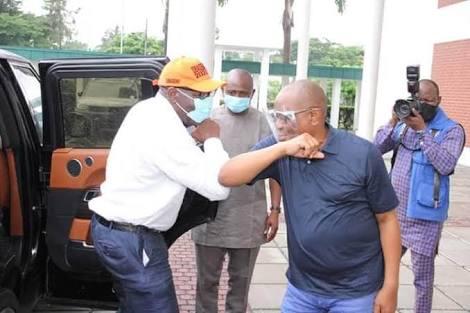 The Edo State Governor, Mr. Godwin Obaseki, has praised Edo people, the Rivers State Governor, Nyesom Wike and other Peoples Democratic Party Governors for their role in his re-election at the September 19 gubernatorial poll.

The governor gave the commendation during his thank you visit to Governor Wike at Government House in Port Harcourt, on Wednesday.
Obaseki was accompanied on the visit by his wife, Mrs. Betsy Obaseki; Deputy Governor, Rt. Hon. Philip Shaibu, and his wife, Mrs. Maryann Shaibu, with members of the Edo PDP Campaign Council led by Chief Dan Orbih.

He said Edo people were instrumental to his re-election for a second term, adding, “I want to thank Edo people for their doggedness and determination in ensuring that their votes counted and the will of the people achieved. The victory at the September 19 poll was made possible by God and God used the people as an instrument to actualise my second term ambition.”

Obaseki expressed appreciation to the Rivers State Governor and Chairman of PDP National Campaign Council for Edo gubernatorial election, for his immense contribution to his victory at the poll, adding that Edo people recognise his strategic role.

He assured that Edo will be better with his re-election as his administration will concentrate on delivering development to Edo people.
On his part, Wike commended Governor Obaseki and his deputy, for standing firmly by Edo people, adding that it was a motivating factor for them to join hands in solidarity.

The Rivers State Governor said he is excited that all the states in the South-South geopolitical zone now belong to one political party and can now speak with one voice.

He urged Obaseki to forgive those who stood against him in the buildup to the election, noting, “I want to specially thank Edo people for their show of solidarity at the polls.”

NIDCOM clears air on alleged arrest of Nigerians in Switzerland