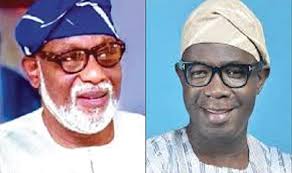 Basking in the euphoria of his victory at the October 10 Gubernatorial election in Ondo State, Governor Rotimi Akeredolu on Tuesday asked his estranged deputy, Agbbola Ajayi to redeem what remains of his honour by throwing in the towel.

Ajayi who contested the governorship election on the platform of the Zenith Labour Party (ZLP) came a distant third behind Akeredolu and the candidate of the Peoples Democratic Party (PDP), Eyitayo Jegede.

Addressing newsmen shortly after visiting President Muhammadu Buhari at the Presidential Villa, Abuja where he presented him with his Certificate of Return, Akeredolu said “God has given us victory, who am I to harbour enmity against anybody?

“But if he decides not to, if opportunities are there, I am sure the party will take a decision on him because he is no longer in our party, he has gone to another party.

The governor said even if Ajayi refused to resign, his days are numbered since a new deputy would soon be inaugurated.

He was accompanied by the state deputy governor-elect, Lucky Ayedatiwa; and the governors of Lagos, Kebbi, Ekiti and Jigawa States.

I started #EndSARS protest before any other person – Wike