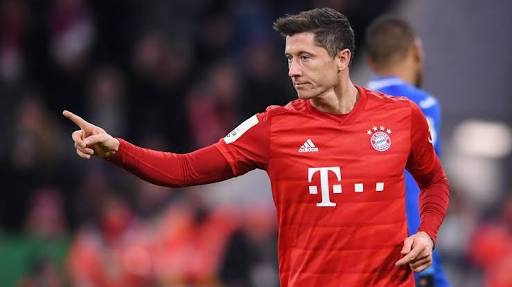 Bayern’s Hansi Flick was named men’s coach of the year after leading his side to a sixth European title.

He scored 16 more goals than any other player in Europe’s top five leagues across all competitions in 2019-20.

Manchester City playmaker De Bruyne, 29, was named Champions League midfielder of the year – and in doing so prevented a Bayern clean sweep of all the men’s awards.

Flick beat Liverpool manager Jurgen Klopp – who guided the club to their first Premier League title in 30 years – and RB Leipzig boss Julian Nagelsmann to the coach of the year award.

Flick, 55, stepped up from his role as Bayern assistant coach last November following the sacking of Niko Kovac.

Meanwhile, former Chelsea and Ivory Coast striker Didier Drogba was awarded the Uefa President’s Award by Aleksander Ceferin for a “commitment to excellence both on and off the pitch”.

The Uefa awards were announced alongside the Champions League group stage draw in Geneva, although club officials did not attend due to the ongoing coronavirus pandemic.

Player of the year voting was decided by the 80 coaches of the clubs in last season’s European competitions, along with 55 journalists – one from each of Uefa members’ association.

Genoa v Torino: Serie A match off after 14 Covid-19 cases‎