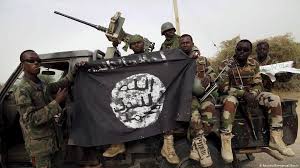 ‎10 soldiers killed by ISWAP during ambush‎ in Borno village

It was gathered that several soldiers also sustained injuries during the attack.

The insurgents captured two gun trucks in the attack on the troops who were on a routine patrol when their convoy was ambushed. ‎

A source in the Nigerian Army said the insurgents took the troops by surprise.

He said, “The troops engaged the terrorists in an encounter which lasted for about 30 minutes, and as a result we lost 10 of our special forces soldiers.

“The insurgents took us by surprise.

“Our wounded soldiers have been taken to Mile 4, while those killed have been transported back to Maiduguri.”

The Nigerian Army is yet ‎to issue a statement on the development.
‎
‎