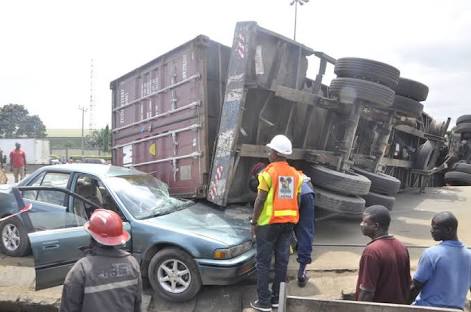 ‎T‎wo persons died while three others sustained injuries when a 20-feet container fell on a commercial bus at Ilasamaja on the Oshodi-Badagry Expressway, Lagos, on Sunday.

Director General of ‎Lagos State Emergency Management Agency, ‎Olufemi Oke-Osanyintolu, who confirmed the incident, said the dead bodies and injured persons were taken to Isolo General Hospital.
‎
It was gathered that a male and female died in the incident.
‎
The truck with registration number SGM 715 XA, which was carrying a 20-ft container collided with a commercial bus discharging passengers under the bridge at Ilasamaja at about 7:00pm. ‎

Oke-Osanyintolu said the impact of the fallen truck killed the two passengers on the spot. ‎

Apart from three others, including the bus driver, who were rescued with injuries, another three passengers escaped unhurt.