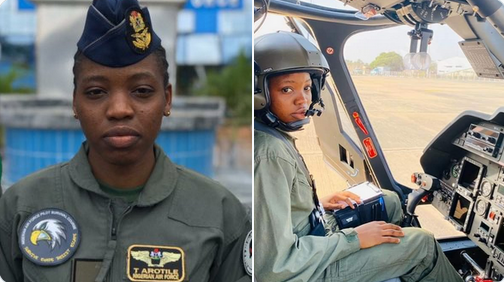 For her not to die in vain and to honour the memory of Nigeria’s first female combat helicopter pilot for her invaluable contributions to the fight against banditry and other criminal activities in the country, the Nigerian Air Force (NAF) on Tuesday, immortalised late Flying Officer Tolulope Arotile.

This was contained in a statement made available to newsmen in Abuja by the Director of Public Relations and Information, Nigerian Air Force, Air Commodore Ibikunle Daramola.
According to him, “the newly renovated and remodelled Pilots’ Crew ‘Room’ at the 115 Special Operations Group (115 SOG) Port Harcourt was named after the late officer.
The edifice is the Pilots’ Crew Room which houses an Operations briefing room, computer room/library, pilots’ life-support room and lounge as well as a kitchen, dining room, changing room for pilots on standby and several restrooms”Speaking during the ceremony, which also featured the commissioning of a newly constructed Block of 18 two-bedroom flats for Senior Non-Commissioned Officers (SNCOs) ,as well as a water project, Air Commodor Daramola quoted the Chief of the Air Staff (CAS), Air Marshal Sadique Abubakar, as saying that immortalising the deceased was done, not only to honour her memory but also to further inspire young girls in Nigeria to study, work hard and pursue their dreams and legitimate aspirations with pride and honour.
He added that “It is gratifying to note that, since late Tolulope’s demise, many young Nigerian girls have indicated their interest to join the NAF. Besides, no fewer than 12 other female officers, who have undoubtedly been motivated by her inspirational life and the unprecedented and exemplary contributions by other female and male pilots, are currently undergoing flying training, both within and outside the country, to become NAF pilots.”