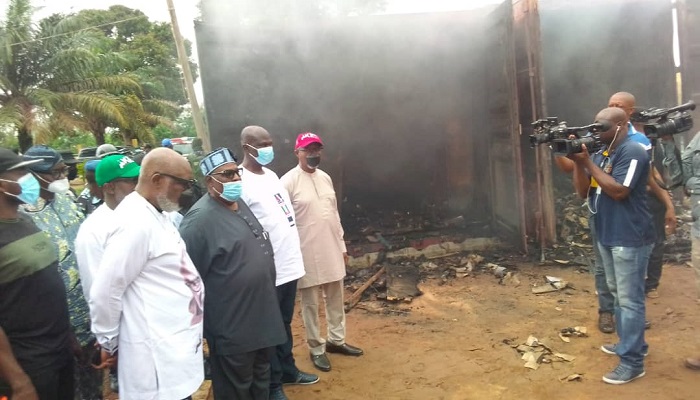 *** We shall investigate cause of fire incident says INEC

Ondo State Governor, Rotimi Akeredolu on Friday stormed the office of the Independent National Electoral Commission (INEC) in Akure which was gutted by fire on Thursday, lamenting that the incident was a major setback to the October 10, gubernatorial election in the state.

He said the mysterious fire incident that destroyed 5,141 card readers meant for the coming election in the state as worrisome and unfortunate.

The Ondo State office of the INEC had gone up in flames at about 8;20 pm on Thursday razing a section of the building housing the ICT unit and destroying card readers, among other important facilities.

But, speaking during an on the spot assessment visit to the scene of the incident at the INEC office in Akure, the governor who is seeking a second term in office said the incident was saddening, urging the electoral commission not to allow the incident to discourage them from delivering credible election for the people of the state.

“The unfortunate occurrence is disheartening and unwholesome. However, we want to assure INEC of our support as a government.

“I hope that the well-intended desire of the State Government to assist the electoral body at assuaging the effects of the incident will not be termed as compromising the integrity of INEC,” he said.

The Resident Electoral Commissioner (REC), Rufus Akeju who received the governor expressed appreciation to the state’s helmsman for the visit.

He said the cause of the fire incident would be investigated.

He assured that the damage caused by the inferno was not so severe as to contemplate a postponement of the Oct. 10 governorship poll in the state.

“However, it is quite saddening that there was nothing to salvage in any of the two 40 feet containers that housed the smart card readers,” Akeju said.