Mutineering soldiers in Mali on Tuesday detained Keita and some members of his cabinet at his residence in Bamako, the country’s capital.

“We can tell you that the president and the prime minister are under our control,” a top rank soldier, who requested anonymity, told AFP.

But reacting to the development, Chairperson of the African Union Commission, Moussa Faki, called for the immediate release of the duo.

He also called on the United Nations and other international organisations to oppose the use of force to end Keita’s political reign in Mali.

“I strongly condemn the arrest of President Ibrahim Boubacar Keita, the Prime Minister and other members of the Malian Government and call for their immediate release. 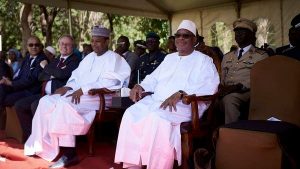 “I strongly condemn any attempt at anti-constitutional change and call on the mutineers to cease all use of violence and respect for republican institutions.

“I call on the Economic Community of West African States, the United Nations, and the entire international community to effectively combine their efforts to oppose any use of force to end the political crisis.”

The arrest of Keita and Cisse came few hours after ECOWAS Special Envoy to Mali and former President Goodluck Jonathan told President Muhammadu Buhari that the main opposition group in Mali, M5 was opposed anything other than the resignation of the embattled president in ongoing efforts to resolve the crisis in the West African country.