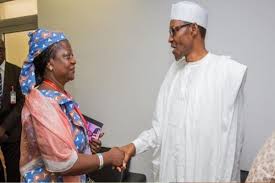 President Muhammadu Buharu has asked the Senate to confirm the appointment of his Special Assistant to the President on Social Media, Lauretta Onochie, as a National Commissioner of the Independent National Electoral Commission representing Delta State.

In a letter of request read by the President of the Senate, Ahmad Lawan, on the floor of the Senate on Tuesday, the president also asked the upper chamber of the National Assembly to confirm three other nominees.

The letter reads in part: “Pursuant to Paragraph 14 of Part I(F) of the Third Schedule to the Constitution of the Federal Republic of Nigeria 1999, as amended, I hereby forward for confirmation by the Senate, the appointment of the following four (4) Commissioners for the Independent National Electoral Commission (INEC).”

Buhari, in a separate letter to the Upper Chamber, also requested confirmation of appointment of three Executive Directors of the Board of the Federal Roads Maintenance Agency (FERMA).

According to the President, the request for confirmation was in accordance with the provision of Section 2(3) of the Federal Roads Maintenance Agency (Amendment) Act 2007.