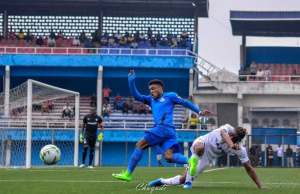 A brilliant dribble and perfect pass by Anayo Iwuala allowed Tosin Omoyele to score and earn Enyimba a 2-1 win over Entente Setif of Algeria Sunday in a high-profile CAF Confederation Cup clash.

The showdown between former two-time CAF Champions League winners in Aba was settled by the magic of Iwuala, who evaded six Algerians before laying off the match-winning through ball.
Iwuala, 22, has been capped twice by Nigeria and considered a rising star who will soon be on the radar of European club scouts.
Enyimba captain Austin Oladapo atoned for having a penalty saved by equalising before half-time after Monsef Bakrar had given Setif an early lead in the third-round Group A match.

Enyimba have six points, Orlando Pirates of South Africa five, Al Ahly Benghazi of Libya four and Setif one in the African equivalent of the UEFA Europa League.
The first CAF club match in Libya since 2010 ended disappointingly for Benghazi as they were held 0-0 by a Pirates team lacking several injured regulars.
Serbia-born Benghazi coach Dejan Arsov missed the match on an artificial surface at the Martyrs Stadium after testing positive for Covid-19.

Libya had been unable to stage international fixtures due to post-Moamer Kadhafi era violence until a recent United Nations-brokered ceasefire.
Raja Casablanca of Morocco boast the only 100 percent record among the 16 clubs halfway through the group stage after a 2-0 home win over Pyramids of Egypt in Group D.

Both teams had beaten Nkana of Zambia and Namungo of Tanzania in previous rounds so something had to give, and it was a blunder by veteran Egyptian goalkeeper Sherif Ekramy on 15 minutes that turned the tide.

Instead of allowing a shot go wide, the 37-year-old former international tried to grasp the ball and succeeded only in letting it slip into the net.
Ekramy was helpless six minutes later as Democratic Republic of Congo-born Ben Malango raced on to a pass and scored from close range.
Nkana recovered from surrendering a 64-match unbeaten home record in CAF competitions last month by edging Namungo 1-0 in Dar es Salaam thanks to a late Diamond Chikwekwe goal.

While Raja and Pyramids seem set to make the last eight, which two clubs will progress from Group C is less obvious with only two points separating leaders CS Sfaxien of Tunisia from bottom team Salitas of Burkina Faso.
Record three-time Confederation Cup title-holders Sfaxien forced a 0-0 away draw with fellow Tunisians Etoile Sahel, the only club to win all five current and past CAF competitions.
Jaraaf of Senegal put a poor start in the section behind them to overcome Salitas 2-0 in Thies through goals from Albert Diene and Papa Paye before half-time.

Group B is developing into an intriguing three-team contest for qualification with Coton Sport of Cameroon climbing to the top thanks to a 1-0 win at NAPSA Stars of Zambia.
Second-place JS Kabylie of Algeria had Malik Raiah sent off on 77 minutes after two yellow cards, but held on for a 0-0 draw at title-holders Renaissance Berkane of Morocco.
[AFP]

Insecurity: We’ll not negotiate with or pay ransoms to bandits – el-Rufai reaffirms