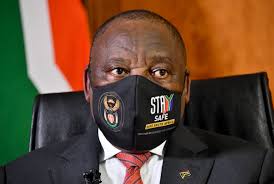 South Africa lifted its ban on alcohol and cigarette sales on Tuesday as the country eased coronavirus measures to level two.‎

Cigarette, tobacco and alcohol sales were prohibited to prevent people from sharing cigarettes and to reduce the burden on hospitals to deal with alcohol-related injuries.

South Africa is the continent’s worst affected country by the pandemic with over 580,000 reported cases.

It means bars will be allowed to re-open and small family and social visite will be permitted.

But there is still a 10:00 pm curfew and wearing a face mask is compulsory in public areas.

International borders will still remain closed and gatherings are still capped at 50 people.

Ramaphosa said that the number of new daily confirmed cases had dropped from a peak of over 12,000 to an average of 5,000 over the past week.

‎“As we look back at the past five months, all indications are that South Africa has reached the peak and moved beyond the inflection point of the curve,” Ramaphosa said.

He called on South Africans not to let their guard down or “become complacent” despite “signs of hope”.

The announcements should bring a much-needed boost to South Africa’s ailing economy, which was in recession before the pandemic and is now expected to contract by over six percent. ‎‎