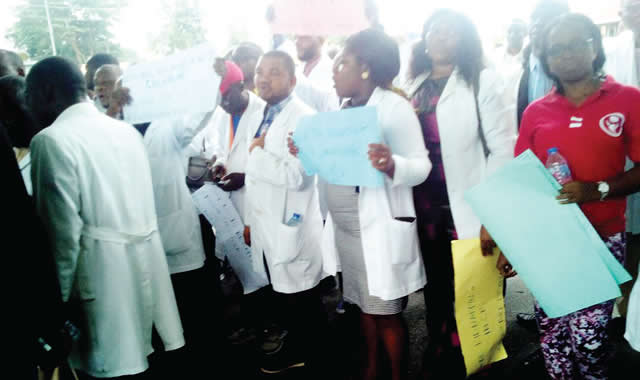 Business activities were completely grounded in Calabar, Cross River State on Tuesday as medical doctors embarked on protest against the kidnap of one of their own, a pediatrician at the University of Calabar Teaching Hospital, Dr Vivien Otu.

Otu was kidnapped by gunmen on Friday night last week around Marian area of Calabar.

The doctors who marched round major streets carried placards with various inscriptions such as ‘Kidnapping is an act of terrorism’, ‘Make Cross River safe again’, ‘Cross River is not a den for kidnappers’, and ‘Let’s stamp out kidnapping’ among others.

The doctors also blocked the Governor’s Office gate after they visited the state House of Assembly where the Speaker, Rt Hon Eteng Williams, assured them of improved security in the state.

The state Chairman of the Nigerian Medical Association, Dr Innocent Abang who led the protest lamented the spate of kidnappings in the state, noting that the kidnap of Otu was one too many.

“We have come to present our grievances to the governor because of the incessant kidnap of our colleagues and how we have become an endangered specie in Cross River State. We pay tax in this state and we are protecting lives and saving lives. So, we want to tell the government to please protect our land and give us the privilege to save lives

“The State Security Adviser, who is standing in for the Governor who is not around, should brief us how far they have gone, to assure us that our colleague is safe and will be released to us today. We don’t want it beyond today. We want Cross River State to be safe from kidnapping. Other states are doing well now. We can also do well,” he said at the Governor’s Office gate,

The State Security Adviser South, Ani Esin who represented the governor assured the doctors that government was working round the clock to ensure that the secured the released of the kidnapped doctor.

“We have been working round the clock since this happened and right now I can say that we are on top of this situation. The governor is also aware of it and has given us the marching mandate that nobody sleeps until Mrs Otu is returned to her colleagues.”