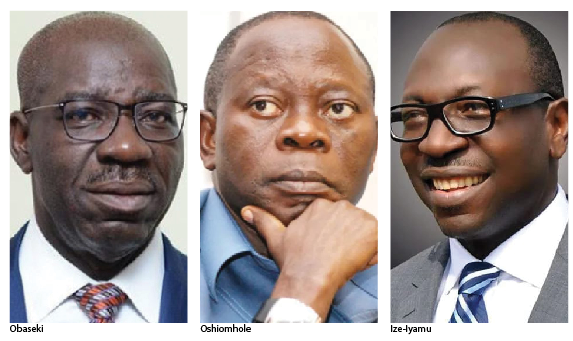 Edo Election: We have no malice, Obaseki tells Oshiomhole, Ize-Iyamu

Governor Godwin Obaseki of Edo State on Tuesday extended the olive branch to his predecessor in office, Comrade Adams Oshiomhole, asking him to rejoin him in his administration’s efforts to move the state forward.

He also asked his main opponent in the just concluded gubernatorial election in the State and candidate of the All Progressive Congress (APC), Pastor Osagie Ize-Iyamu to put the election behind in the interest of the state.

Obaseki spoke on Tuesday after the Independent National Electoral Commission issued him and his deputy, Phillip Shaibu, certificates of return.

Obaseki who polled 307,955 votes to defeat his closest rival, Ize-Iyamu, who got 223,619 votes said time had come for them to put their differences behind and work for the good of the state.

“To our friends and our brothers on the other side of the divide, we are one family in the pursuit to provide services and public good for our citizens.

“I’m using this opportunity to extend the hand of fellowship to my brother, Pastor Osagie Ize-Iyamu, and his other colleagues in the All Progressives Congress to join us and work with us so that we can move Edo forward.

“On a specific note, I want to use this occasion to call on the former chairman of the APC, Comrade Adams Oshiomhole, that the fight is over and he should come and join in building the house where he was part of laying the foundation.

“We have no malice, the only thing we disagreed on is in the approach in moving Edo forward.”