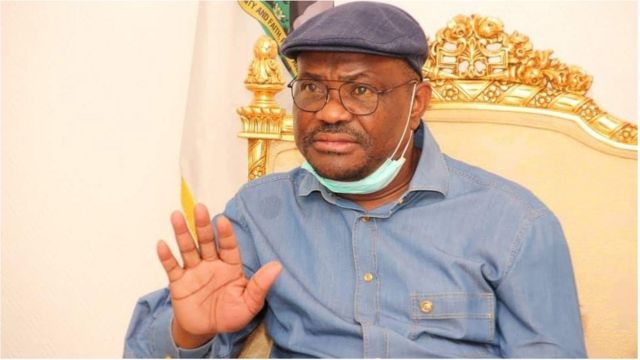 Following the alleged barricade of the hotel where Governor Nyesom Wike lodged in Benin, Edo State by policemen, the Rivers State government, Friday night raised alarm that the life of their Governor is in danger.

There were reports that policemen numbering up to 300 had surrounded the hotel, where the governor, who is the Chairman of the PDP Campaign Council in Edo State, lodged.

The hotel located in the Government Reserved Area in Benin was said to have been barricaded by policemen since Friday afternoon.

The Rivers State Commissioner for Information and Communications, Paulinus Nsirim in a statement alleged that the policemen led by DIG Leye Oyebade, had not hidden their threats that Wike should leave Edo State.

The statement titled, ‘Gov Wike’s life is in danger in Edo State’, read, “The attention of the Rivers State Government has been drawn to a worrisome report that the hotel our Governor, Nyesom Ezenwo Wike, is staying in Benin City is presently under siege by over 300 policemen.

“What is more disturbing is that the policemen led by DIG Leye Oyebade have also been very audible with threats that he should leave Edo State.

“We want to place on record that the Rivers State Governor was appointed the Peoples Democratic Party National Campaign Council Chairman for the September 19, 2020, Edo State governorship election.

“This is even more so when placed against the backdrop of the fact that Governor Abdullahi Ganduje of Kano State, who equally occupies this same position in the All Progressives Congress, APC, and indeed his counterpart, Governor Hope Uzodinma of Imo State, are all in Benin, Edo State, carrying out the same assignment for the APC.

“They are moving about freely, without any siege on their locations or molestation, threats, harassments, and intimidation. We hereby put the Nigerian Government and International Community on notice that the life of Governor Wike is in danger and under serious threat.”

Nsirim described the appointment of the governor as a legitimate and constitutionally recognised appointment in the electoral rules, guidelines, and processes of our country.

“It (appointment) confers on him, the democratic authority to be in Edo State to spearhead the campaign and lend support to the Governorship candidate of his political party.

“Governor Wike has not committed any crime to warrant this intimidation and we want to state categorically that the siege on his hotel is totally unlawful, illegitimate and provocative,” the commissioner added.

However, checks by Daily Tracker Friday night showed that the policemen who were earlier seen around the hotel had left the place.

No explanation was given by the police in the state on the reasons for the alleged siege but a source said “it was for security reasons”.