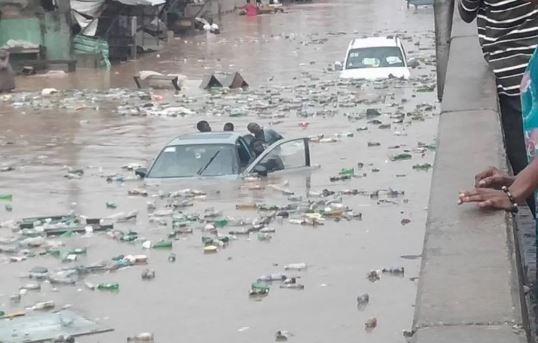 Enugu State Government on Friday held a meeting of emergency management stakeholders in view of imminent flood in the state.
The Nigeria Hydrological Services Agency had warned that there would be severe flooding in most parts of the country between August and September.
The agency said 102 local government areas across 28 states might be severely hit, with 275 others to also experience the disaster.
In response to this, the State Emergency Management Agency (SEMA) organised a brainstorming meeting of the stakeholders to find a solution to the impending disaster.
The Executive Secretary of SEMA, Mrs Nkechi Eneh, said that no fewer than 10 local government areas in the state were marked to witnessed the flood.
Eneh mentioned the council areas to include Enugu North, Enugu South, Aniniri, Udi, Nsukka, Uzo Uwani, Enugu East, Oji River, Nkanu East and Ogbe- Etiti.
She said that the meeting was aimed at appraising the state’s flood preparedness and response mechanisms.
She said that parts of the state had begun to experience flood disasters of various magnitude reminiscent of the experiences in 2018 and 2019 when the state recorded high degree of flooding.
The executive secretary said that the state government had already sent early alert warnings to the concerned 10 local government areas.
Eneh also said that the state government had not only started flood sensitisation campaigns and de-silting of drainages, but had also drawn an emergency preparedness response plan.
Also, the Southeast Zonal Coordinator, National Emergency Management Agency (NEMA), Mr Fred Anusim, said that the agency had started sensitisation campaigns in the communities likely to be affected.
Anusim said that NEMA was prepared for the imminent flood as they had in the past provided shelter and other necessary relief materials to flood victims in the zone.
The representative of the 103 Battalion under the 82 Division Nigerian Army, Enugu, Gen. Charles Eze, said that their barracks was marked out as a disaster unit.
Eze, however, said that the battalion had a full complement of medical team that would provide support to displaced persons.
The army general said that the unit would deploy equipment and manpower to secure lives in the camp.
He, however, said that their medical team had some challenges including shortage of medical supplies, insufficient equipment and lack of relief materials.
Also, the Southeast zonal manager, Nigeria Meteorological Agency (NIMET), Mr Adelugbe Taiwo, said that the weather predictions and early warnings of the agency were timely.
NAN