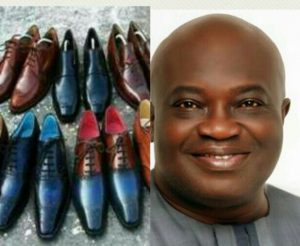 Following alleged attack on the personnel and truck of the State Fire Service, Governor Okezie Ikpeazu of Abia state on Monday ordered the closure of Ariaria Shoe Plaza within the Umuehilegbu Industrial Market.

The governor also suspended the Chairman and all members of Management Committee of the market.

Checks by Daily Tracker revealed that the some shoemakers had attacked firefighters who came to put off an inferno which engulfed a section of the Aba Shoe plaza market, popularly known as ‘Bakassi market’.

The shoemakers were said to be enraged that the firefighters came late to the scene and in the process descended on them. In the process, most of the personnel were seriously injured while their truck was also destroyed. No life was however lost in the melee.

An eyewitness who spoke to Daily Tracker lamented that the firefighters arrived very late when the fire had consumed most of their shops and properties.

“They were called when the fire started and couldn’t come, only to come later pretending to have come to put off fire that already finished all we had. We are not ready for such eye-service. They got what they deserved,” the eyewitness narrated.

Apparently enraged by the situation, the governor in a statement signed by his Chief of Staff, Dr. Anthony Agbazuere, ordered the closure of the market and also suspended the Chairman and all members of Management Committee of the market.

He also directed the Police and other security agencies to arrest all perpetrators of the act.

On his part, the Aba Zonal Commander of the Abia State Fire Service, Mr. Okezie Uche, said they escaped death by whiskers following the attack on them by the shoemakers.

In his words; “The shoemakers attacked us, destroyed our vehicle and injured us without any form of provocation except for them coming to extinguish the fire. We got a call about a fire outbreak at shoe plaza in Ariaria International market.

“They attacked us didn’t allow us to do our job when we got there all the way from our office. They started beating us, stole our phone, destroyed our vehicle for no reason just we came there to do our job. I don’t know what they really wanted from us.

“These people started beating us while the fire was still burning. The police came to our rescue. They beat our driver, one of our workers got his arm broken.”