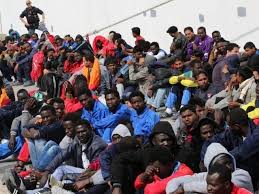 The International Organisation for Migration (IOM) said on Tuesday that no fewer than 83 migrants were saved last week after their smugglers abandoned them in the Sahara desert in northern Niger.

A team from the IOM and Niger’s Civil Protection service found the group 230 kilometers (140 miles) from the crossroads town of Dirkou on September 3, the agency said on Facebook.

The 83 comprised 75 Nigerians, 41 of them women, including twin four-year-old girls, as well as four Togolese, three Ghanaians, and a Malian.

They had left the Nigerien town of Agadez, the main stepping-off point for African migrants trying to cross into Europe via Libya, a week earlier.

On September 1, the migrants were abandoned by their four drivers, after first taking all their belongings, when they spotted military vehicles ahead, the IOM said.

“We were stranded for three days without food or water. We searched for water, but all we found were dirty wells used by livestock. So we were not able to drink at all,” a 25-year-old Nigerian identified as Dennis told the IOM.

“People were collapsing left and right. I started crying when I saw the cars approaching, hoping help was coming.”

After receiving water, food, and medical care the migrants were taken to a coronavirus quarantine site, where they will be detained for 14 days.

The cross-Saharan migrant route to Europe is notorious for vehicle breakdowns in heat frequently exceeding 38 degrees Celsius (100 degrees Fahrenheit) and abandonment by traffickers, fearing interception at checkpoints, or by military patrols.

More than 250 migrants were picked up in April near Madama, near Niger’s border with Libya.