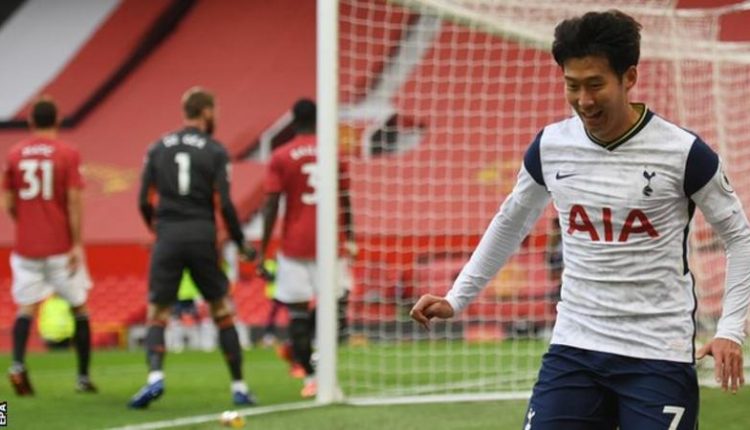 Jose Mourinho returned to Manchester United and humiliated his former club as Tottenham came from behind to record a famous Old Trafford win.

Son Heung-min and Harry Kane scored twice, with Tanguy Ndombele and Serge Aurier also on target as 10-man United suffered a defeat on a par with their 6-1 thrashing at home by Manchester City in 2011.

It meant it was not only the heaviest defeat since Ole Gunnar Solskjaer took temporary charge in December 2018, but also the largest United have suffered since Ed Woodward took over as executive vice-chairman in 2013.

The result leaves United 16th in the Premier League, with newly promoted Fulham and West Brom the only clubs with a worse goal difference. Only West Brom have conceded more than their 11 goals.

United were completely outplayed, even before they were reduced to 10 men midway through the first half when Anthony Martial dragged his hand across Erik Lamela’s face in reaction to an elbow in his neck.

In contrast, Tottenham moved up to fifth after emerging from a packed schedule of five games in 11 days in three competitions with a creditable four wins and a draw.

After struggling to bring in new players since the end of last season, the preceding 24 hours had been quite good for United, with deals for veteran striker Edinson Cavani and Brazilian full-back Alex Telles nearing conclusion.

The match could not have got off to a better start either. Davinson Sanchez barged Martial over inside the box within 30 seconds, which provided Bruno Fernandes with the chance to score yet another penalty.

After that it was downhill at a rapid rate for the hosts, who had lost their lead after four minutes, were behind after seven and by the break had conceded four at home in the first half of a league game for the first since 1957, bizarrely also against Spurs.

There was no disguising the abysmal nature of United’s defending, with £80m skipper Harry Maguire one of the chief culprits.

The England centre-back got himself into a real mess trying to deal with what appeared to be a routine ball into the box. Twice he failed to clear, as did Luke Shaw, allowing Ndombele to drive home his first Premier League goal in more than a year.

If the equaliser was bad, what followed was worse.

He conceded a free-kick for a foul on England team-mate Harry Kane 45 yards from goal, but instead of delaying the situation, which Sanchez did when faced with a similar situation at the other end not long afterwards, Maguire backed off. Kane simply slid a pass through the gap and Son’s pace took him clear of Eric Bailly and Shaw.

The third was a result of Kane sliding in to win possession on the edge of the home area after Bailly’s short pass had put Nemanja Matic under pressure. The England skipper then finished after Son had crossed low.

A 14-minute spell either side of the interval brought another goal for Son and a rare goal for Aurier.

By this point, Solskjaer needed to be thankful Old Trafford was largely empty and the only noise was the visiting contingent in their celebrations. The thought of it being full to witness a humiliation like this is not a pretty one.

In his two-and-a-half years as United boss, Mourinho only saw his team score four in the first-half of a Premier League game at Old Trafford once. They never scored five in a game anywhere, let alone six.

Given the start they had, Mourinho must have been delighted not only with the way his players responded but the manner in which they maintained the pressure on their beleaguered hosts as they capitulated.

The one negative from that first-half was Lamela’s reaction to the incident with Martial.

While it could be argued Lamela did not strike Martial in the face – his elbow went into the Frenchman’s neck to provoke the red card reaction – his response, first holding his face, then falling to the ground when it was evident the contact was minimal did not reflect well on the Argentine.

By the end, Mourinho seemed to be taking little satisfaction from what was unfolding.

He did not even leave his dug-out as Kane converted the penalty after Paul Pogba had needlessly taken down Ben Davies.

At the end, he shook Solskjaer by the hand and gave him a consoling arm around the head. He, more than most, knows the issues facing managers of this mighty club which, since Sir Alex Ferguson’s retirement in 2013, routinely follows significant steps forward by taking massive ones in the other direction.