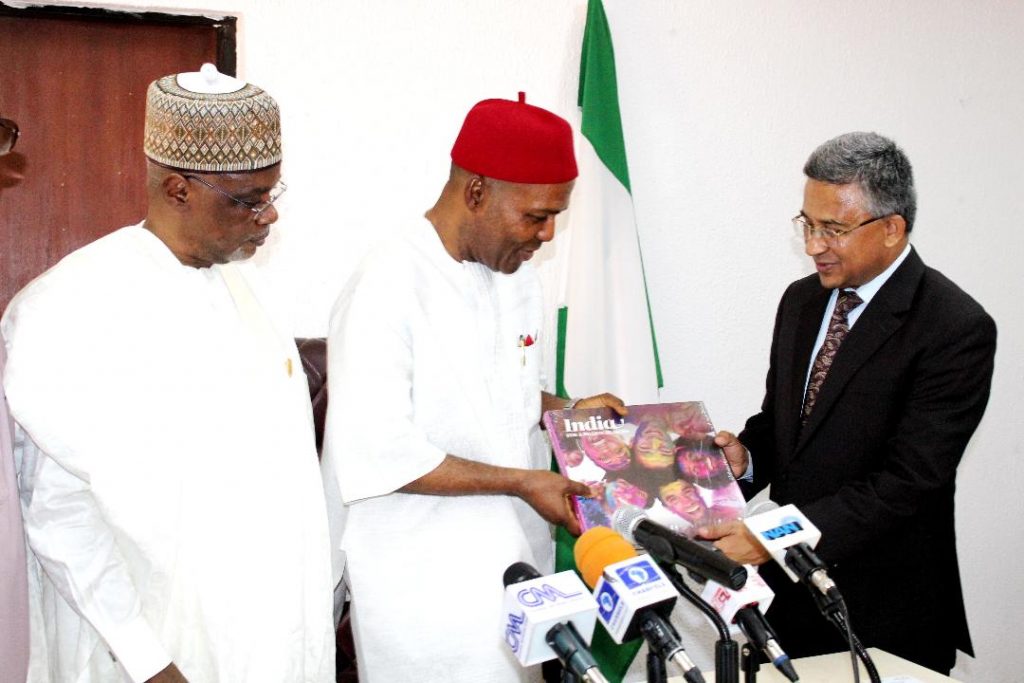 Nigeria and India sign MOU on exploration of outer space‎

By Daily Tracker On Aug 13, 2020
0
Share
‎‎
Nigeria and India on ‎Thursday signed a Memorandum of Understanding (MOU) for cooperation in the exploration and uses of outer space for peaceful purposes.

The MOU was signed during a virtual meeting between Nigerian and Indian officials. ‎
‎
Minister of Science and Technology, Dr. Ogbonnaya Onu, signed the MOU on behalf of the ‎Nigerian Government while the Indian High Commissioner to Nigeria, Ambassador Abhay Thakur, signed on behalf of the Government of India.
‎
The signing ceremony was also witnessed by the Defence attaché of the Indian High Commission, Col. Saghih Dubey and the Acting DG of National Air Space Research and Development Agency, Dr. Francis Chizea.
Speaking after signing the agreement, ‎Onu said the MOU will strengthen the deep historic ties between both nations in terms of socio-economic development, space exploration, environmental safety and trade.
He further said that the two nations had made relentless efforts in ensuring global peace, adding that “Nigeria and India share many historic ties, as both nations have been working closely to ensure global peace”.‎
“The signing of the MOU is a right step in the right direction, as it would accelerate Nigeria’s economic transformation from a resource-based to a knowledge and Innovation-driven economy,” Onu added.
Related Posts

Jun 30, 2022
The minister commended India for its achievements in space exploration, adding that other developing countries looked up to India to achieve similar feat.
He noted that the Federal Government intends to make Nigeria’s economy competitive globally through investment in space technology.‎‎
Onu said that both nations are poised to look for new areas in collaboration and development in peaceful uses of Outer Space Technology.
Nigeria has already developed and launched four earth observation satellites (NigeriaSat-1, NigeriaSat-2, NigeriaSat-X and NigeriaEduSat-1) and two communications satellites (NigComSat-1 and NigComSat-1R).‎
Earlier, speaking through digital video link, the Indian Minister of State for External Affairs, Shri V. Muraleedharan,‎ said the MOU will be of mutual socio-economic benefit to both countries.
Nigeria is India’s largest trading partner in Africa with a trade volume of $13.8 billion, while also providing 10% of India’s energy needs.
The Indian minister noted that the MOU will further expand collaborations in agriculture, space technology and defence.
Post Views: 873
Continue Reading