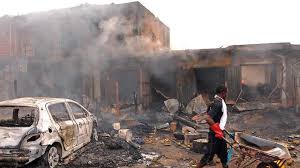 The perennial crisis between the Tiv/Jukun in Kwararafa village, Gossol local government area of Taraba state resumed on Thursday resulting in the death of two persons.

The ownership of Danacha village which was renamed Kwararafa by the state government two years ago had remained a major cause of the crisis in the area.

Also, several houses were burnt, while residents took to their heels, sending panic to neighbouring villages.

Sources said the latest crisis started on Wednesday when some youths from Tiv and Jukun ethnic groups attacked Danacha village and burnt some houses belonging to the two tribes.

Checks further revealed that some gunmen dressed in Army uniform stormed Kwararafa village predominately Jukun settlement at about 5.30 am and shot two persons to dead.

As a result of the development the warring Jukun and Tiv Youths in Danacha and Kwararafa villages have vowed to unleash mayhem in the entire area.