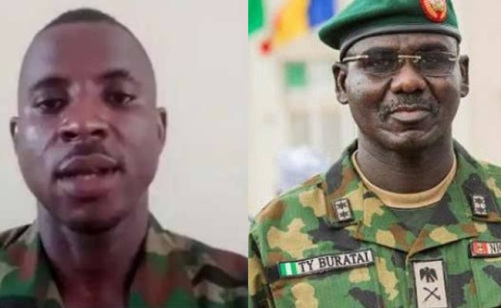 ‎Lance Corporal Idakpini Martins, a soldier who criticised the Chief of Army Staff, Lt. Gen Tukur Buratai, over the handling of the Boko Haram crisis,‎ is to face a military court-martial in Sokoto.

The Nigerian Army has transferred his case ‎from the Federal Capital Territory, Abuja, to Sokoto State.

The Lance Corporal had in a video that went viral on the social media, said troops did not have enough weapons to fight Boko Haram and armed bandits.

His lawyer, Tope Akinyode, disclosed that military authorities have fixed the court-martial to hold in Sokoto since he was serving in Operation Hadarin Daji, Sokoto, at the time he released the video.

There are indications that the trial might commence today.

Lance Corporal Idakpini was arrested on June 20, 2020, following the release of the video, and was subsequently detained in Abuja.

He was reportedly denied legal representation until his lawyer approached an Abuja Federal High Court to file a human rights violation suit.‎