*** insist ‘the case against Trump, Pence is open and shut’ 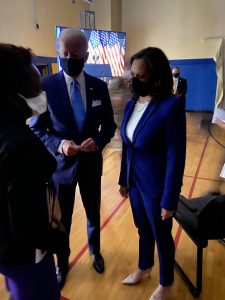 Harris is the first woman of colour in America’s history to be part of major party presidential ticket.

Biden and Harris also used the opportunity of the event which took place at the Alexis Dupont High School in Wilmington to send a strong message to President Trump that they are ready for the battle ahead, describing the president administration as a total failure especially in the manner the rampaging covid-19 pandemic has been handled.

They expressed dismay that because of the lackluster attitude of the president, over 16 million jobs had been lost, while the nation loses a life in every eight seconds, a development they said was unfortunate.

Harris asked the American people to organize and “vote like never before because we need more than a victory November 3rd.”

“We need a mandate that proves that the past few years do not represent who we are or who we aspire to be. Joe likes to say that character is on the ballot. And it’s true.” 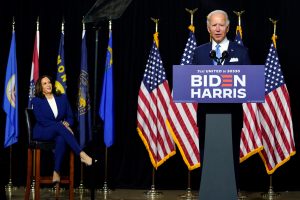 Specifically, Biden used his opening remarks to praise Sen. Kamala Harris who he called “the right person” for the role of vice president, noting that the forthcoming November 3 election is “serious moment for our nation.”

“I had a great choice but I have no doubt that I picked the right person to join me as the next vice president of the United States of America and that’s senator Kamala Harris,”

“Kamala, as you all know, is smart, she’s tough, she’s experienced, she’s a proven fighter for the backbone of this country; the middle class, for all those who are struggling to get into the middle class. Kamala knows how to govern; she knows how to make the hard calls. She’s ready to do this job on day one.” 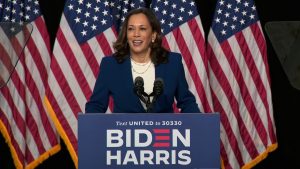 He said she is “a child of immigrants” who “knows personally how immigrant families enrich our country as well as the challenges of what it means to grow up Black and Indian-American in the United States of America.”

“And this morning, all across the nation, little girls woke up, especially little Black and brown girls that feel overlooked and undervalued in their communities, but today — today just maybe they’re seeing themselves for the first time in a new way as president and vice presidents.” 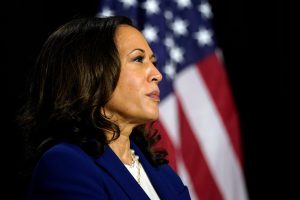 “His refusal to get testing up and running, his flip-flopping on social distancing and wearing masks; his delusional belief that he knows better than the experts. All of that is reason and the reason that an American dies of Covid-19 every 80 seconds,” Harris said regarding Trump.

See also  Pilots, engineers threaten to shut down airlines over sack of members‎

Harris claimed Trump “inherited the longest economic expansion in history from Barack Obama and Joe Biden” and “ran it straight into the ground.”

“Because of Trump’s failures of leadership our economy has taken one of the biggest hits out of all the major industrialized nations with an unemployment rate that has tripled as of today,” the senator from California said.

Sen. Kamala also took time to discuss the importance of family in her life, referencing the nickname her kids have for her: “Momala”

She said, “I’ve had a lot of titles over my career and certainly vice president will be great. But ‘Momala’ will always be the one that means the most.”

Harris talked about how her parents, Jamaican and Indian immigrants, met while protesting for civil rights in Oakland in the 1960s.

“My mother and father, they came from opposite sides of the world to arrive in America. One from India and the other from Jamaica in search of a world-class education. But what brought them together was the civil rights movement of the 1960s. And that’s how they met as students in the streets of Oakland marching and shouting for this thing called justice in a struggle that continues today,” she said.

The California senator said her parents would bring her to protests as a little girl “strapped tightly in my stroller.”

California Sen. Kamala Harris used her opening remarks during her first campaign appearance as Joe Biden’s choice for vice president to honor the women who helped pave the way for her and acknowledge the work needed to curb the coronavirus pandemic.

“After the most competitive primary in history, the country received a resounding message that Joe was the person to lead us forward and, Joe, I’m so proud to stand with you. And I do so mindful of all the heroic and ambitious women before me whose sacrifice, determination and resilience makes my presence here today even possible,” Harris said.

Harris characterized 2020 as a “moment of real consequence for America.”

“Everything we care about, our economy, our health, our children, the kind of country we live in, it’s all on the line. We’re reeling from the worst public health crisis in a century. The President’s mismanagement of the pandemic has plunging us into the worst economic crisis since the great depression,” Harris said.