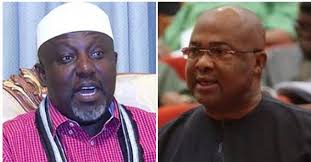 Why Okorocha is angry with me by Gov Uzodinma

Governor Hope Uzodinma of Imo state says his refusal dissolve investigation panels set up by the immediate past governor Emeka Ihedioha administration, remains the major reason why he fell out with former governor of the state, Senator Rochas Okorocha.

Uzodinma, according to a statement on Sunday by his media office, stated this while briefing leaders of the All Progressives Congress at an enlarged meeting of the state caucus of the party at the Government House, Owerri on Saturday.

The governor, according to the statement, titled, ‘Why I fell out with Okorocha – Uzodinma,’ said he refused to grant Okorocha’s request on the dissolution of the panels.

He said, “There were two requests Okorocha made to me when I became governor.  The first was to dissolve the panels set up by Ihedioha to probe his administration. I refused to grant the request because I think the mood of the  Imo people was in support of the probe.

“The second request was to allow Dan Nwafor to  remain chairman of APC in the State.

“I also declined that request and told him that the party rules were there to guide everyone on the matter.”

The governor alleged that Okorocha made the request to pave the way for his ambition to run for presidency in 2023.

However, Okorocha denied ever requesting Uzodinma to stop the paels initiated by Ihedioha.

Okorocha, in a statement by his media aide, Mr. Jones Onwuasanaya, said he only requested for a fair hearing from an impartial panel as he could not get justice from the current one allegedly dominated by Peoples Democratic Party members.

The statement read, “Owelle utilised his mandate judiciously and kept to his covenant with God and man, in his eight years as the governor of Imo State

“What Okorocha has always requested, for which he has gone to court is that impartial panels should be constituted to probe his stewardship and not the present situation, where key stakeholders of the opposition People’s Democratic Party constitute 95 per cent of the membership of the panels probing him.”