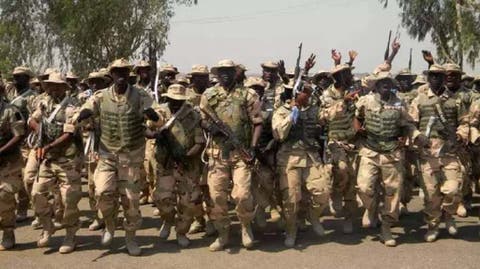 Army denies alleged deployment of only Northern officers to Southeast

The Nigerian Army has dismissed as false an allegation that it was deploying only commanders of Northern extraction to quell tension in the Southeast zone of the country.

In a statement issued on Monday in Abuja, Director, Army Public Relations, Brig.-Gen. Mohammed Yerima said there was no truth in the allegation.
He was reacting to an online publication entitled: “Nigerian Army shuns Southern officers, deploy Northern commanders to quell tension in Southeast.”
Gen. Yerima stated that ordinarily, the Nigerian Army would have ignored the illogical narrative by the online medium, but for the good of members of the public, it must respond.

He said the report was targeted at steering discord and disunity among peace-loving Nigerians who had refused to support the senseless attacks on security apparatuses in the Southeast and South-South geopolitical zones.
He stressed that the army, as a national force, does not promote or post its personnel along ethnic or religious lines.

The Army spokesperson added that postings were routine exercises based on professional competencies not as portrayed by the said publication.

“For the records, let it be clear in everyone’s mind that the Nigerian Army does not train, deploy or operate along ethnic, religious, tribal or regional divides.
“Senior officers are posted to command units based on their capability and competence taking into consideration their posting history.
“Furthermore, officers are the most frequently posted personnel of the Nigerian Army.
“However, because of the bias and seed of discord that the author of the report wanted to sow, he did not do a thorough background check of his report,’’ Gen. Yerima stated.

Discrediting the report further, he added that while the General Officer Commanding 82 Division, Nigerian Army, Enugu, Maj.-Gen. Taoreed Lagbaja is from Southwest, the Commander 34 Brigade Owerri. Brig.-Gen. Raymond Utsaha is from the North Central.
He stated also that the General Officer Commanding 2 Division Ibadan, Maj.-Gen. Gold Chibuisi is of Southeast extraction.
Gen. Yerima stressed that Brig.-Gen. Farouk Mijinyawa was never the Commander of 16 Brigade of the Nigerian Army as claimed by the online publication.

He added that it was clear that the concocted story lacked everything in terms of credibility and exists only in the figment of the author’s imagination.
Gen. Yerima noted that several subversive elements had attempted to discredit the formidable security network in the Southeast in the past months.
He stated that the Army deployed officers and men to checkmate the activities of the bad elements who were bent on wreaking havoc in the region in line with its Constitutional role of aiding the civilian authority.

“The uncoordinated and poorly written article exposes the real intent, albeit the very low Intelligence Quotient of the author and that speaks volumes about the motive of the publisher.
“The Nigerian Army would like to request all peace-loving Nigerians to disregard the content of the article as it lacks logic.
“The Nigerian Army remains committed to the defence of the territorial integrity of Nigeria as well as protecting lives and properties of all citizens and residents.

“It solicits for the continuous support of all patriotic Nigerians in stamping out activities of criminals including subversive and divisive elements for a peaceful and prosperous Nigeria,’’ Gen. Yerima stated.