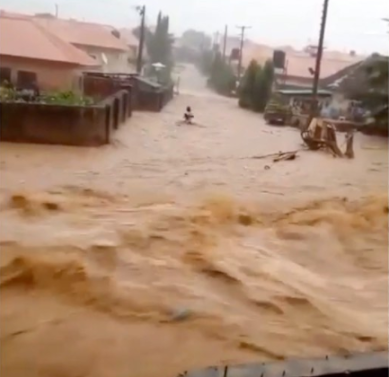 ‎The Search and Rescue team of the FCT Emergency Management Agency (FEMA) has‎ discovered the body of one Mr. Garba Joseph, 43, after two days search from a flooded river around TradeMoore Estate, Lugbe, in Abuja.‎

‎The victim is a native of Akoka-Edo, in Edo State,‎

Director-General of FEMA, Alhaji Idriss Abbas, who disclosed this in a statement on Sunday, warned FCT residents to avoid flooded areas to avert the dangers of falling victims of flood.
‎
An eye witness account from one of FEMA’s volunteers, Kenneth Chima, who captured the incident on video, explained that the victim was among four men that tried to walk through the water.

“And I kept warning them to go back, three of them went back but only this man insisted on crossing, unfortunately the water overpowered him and washed him away,” the eye witness said.

The FEMA DG, Abbas, said most of the deaths recorded in the past from flood in the FCT were as a result of non-compliance to instructions and early warnings.

Abbas therefore emphasised the need for residents to adhere to instructions and early warnings from relevant authorities.

According to him, attitudinal change was the key to reducing disasters to the barest minimum in the FCT.
‎
Abbas decried the increasing rate of flood in the FCT due to residents’ apathy towards the government’s directives and early warnings.

“This is also despite FEMA’s consistent sensitisations based on the Nigerian Meteorological Agency (NIMET) and Nigeria Hydrological Services Agency (NIHSA) predictions of torrential rainfall and dangers of flooding,” he said.‎

Noting that NIHSA’s most recent predictions warned of torrential rainfall and flooding from August, he said FEMA had carried out aggressive sensitisation to educate residents on ways to prevent the impending flood.
‎
Abbas further disclosed that FEMA was conducting sensitisation programmes in five different indigenous languages in the FCT using different media channels.

Buhari transfers NIMC to Ministry of Communications and Digital Economy