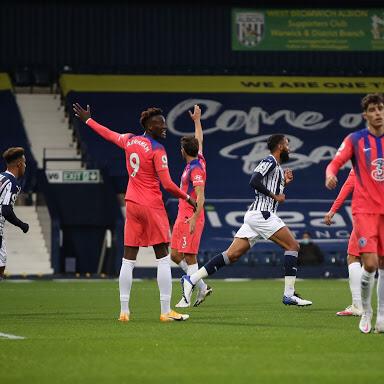 Frank Lampard’s expensively assembled side were torn apart in the first half at the Hawthorns as Callum Robinson’s brace and Kyle Bartley’s goal punished woeful defending.

Chelsea captain Thiago Silva was guilty of an woeful mistake on his Premier League debut when the former Paris Saint-Germain defender gifted the ball to Robinson for his second goal.

But Mason Mount reduced the deficit soon after the break and Callum Hudson-Odoi got Chelsea’s second before Abraham equalised deep into stoppage-time.

It was a much-needed show of spirit from Chelsea after their defeat against Liverpool last weekend.

The prospect of a second successive loss had Lampard visibly fuming on the touchline in the first half, but Chelsea responded with a much-improved display.

While Lampard will be relieved by evidence of Chelsea’s attacking potency, there must be questions about their shambolic defence.

Despite dropping error-prone Kepa Arrizabalaga after the goalkeeper’s costly mistakes against Brighton and Liverpool this season, Lampard learned that Chelsea’s problems run deeper than who is between the posts.

Lampard’s £200 million ($254 million) close-season spending spree was supposed to turn Chelsea into title challengers, but on this evidence they are still way behind champions Liverpool.

Willy Caballero took over in goal, but he was hardly convincing and Senegal keeper Edouard Mendy, signed from Rennes earlier this week, looks certain to make his debut soon.

Kepa, the world’s most expensive keeper, could leave Chelsea on loan before the transfer window closes in October.

Despite Lampard’s changes, Chelsea were still creaky at the back and it took just four minutes for Albion to exploit their frailties.

Marcos Alonso is likely to lose his place at left-back when summer signing Ben Chilwell is fully fit and the Spaniard did his cause little good with a woeful header straight to Matheus Pereira.

Robinson was picked out by Pereira and he advanced to the edge of the Chelsea area before drilling a low shot through Reece James’ legs and past Caballero’s slow dive.

Timo Werner was inches away from equalising when the Germany forward met Mount’s cross with a volley that hit the crossbar.

Silva made a horrendous mistake that led to Robinson’s second goal in the 25th minute.

Allowing Mateo Kovacic’s pass to slip under his foot inside his own half, Silva surrendered possession to Robinson with embarrassing ease and was left with a sheepish look on his face as the Albion striker made him pay with a clinical finish.

There was worse to come for Chelsea three minutes later when their sloppy defence failed to pick up Darnell Furlong at Pereira’s corner and his flick reached Bartley, who was played onside by James and slotted past Caballero from close-range.

Lampard changed the tone of the match when he sent on Cesar Azpilicueta and Hudson-Odoi at the interval.

If Lampard read the riot act to his flops at the break, he got an immediate response as Mount fired home from 20 yards in the 55th minute.

Chelsea were more dynamic now and Hudson-Odoi gave them hope when he played a neat one-two with Kai Havertz and slotted into the far corner after 70 minutes.

With full-time just seconds away, Abraham came to Chelsea’s rescue when the strike tapped in after Albion keeper Sam Johnstone turned Mount’s shot into his path.

Albion appealed for handball against Havertz in the build-up but Chelsea’s luck was in as VAR let the goal stand.

Only 18 lives died in attack on Zulum’s convoy – Army