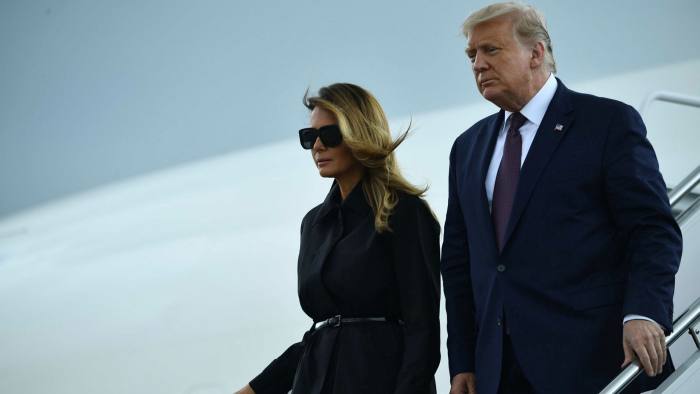 Donald Trump has announced that he and the first lady, Melania Trump, have tested positive for coronavirus, after one of his closest advisers contracted the virus, throwing the 2020 US election into chaos.

On Friday morning, the US president tweeted: “Tonight, @FLOTUS and I tested positive for COVID-19.” He wrote that they would begin quarantine immediately.

The announcement came after Hope Hicks, who serves as counsellor to the president and accompanied him to the presidential debate on Tuesday and to a Minnesota rally on Wednesday, tested positive on Thursday.‎

The president’s doctor, Navy Commander Dr Sean Conley, said in a statement early on Friday: “The president and first lady are both well at this time, and they plan to remain at home within the White House during their convalescence.

“The White House medical team and I will maintain a vigilant watch, and I appreciate the support provided by some of our country’s greatest medical professionals and institutions,” Conley wrote. “Rest assured, I expect the president to continue carrying out his duties without disruption while recovering.”

He said he received confirmation of the positive tests on Thursday evening. With little over a month before the elections, this is the most serious threat to the life of an American president since Ronald Reagan was shot in 1981.

Earlier, Trump confirmed in an interview with Fox News’s Sean Hannity that Hicks had contracted the virus. “She tested positive,” Trump said, adding that he and Melania had taken coronavirus diagnostic tests. “I just went for a test and we’ll see what happens,” he told Hannity. “I spend a lot of time with Hope,” he added.

Judd Deere, a White House spokesman, told the Guardian: “The president takes the health and safety of himself and everyone who works in support of him and the American people very seriously.

“White House operations collaborates with the physician to the president and the White House military office to ensure all plans and procedures incorporate current CDC guidance and best practices for limiting Covid-19 exposure to the greatest extent possible both on complex and when the president is travelling,” Deere added.

‎The president cancelled plans to meet supporters in Washington DC and travel to Florida on Friday. Instead he is scheduled to host a phone call “on Covid-19 support to vulnerable seniors”.

Melania Trump tweeted that she and Trump “are feeling good and I have postponed all upcoming engagements”.

Although Hicks was tested on Thursday after showing symptoms, Trump traveled to New Jersey and met supporters at his Bedminster Golf Club, and delivered remarks at a fundraising committee reception. The night before, he spoke at a rally in Duluth, Minnesota, before a packed crowd of thousands, most of whom were not wearing masks.

It is unusual for Covid-19 patients to receive a positive PCR test result one day after exposure, public health experts say, and Trump may have been carrying the virus for longer – exposing those he interacted with this week.

If Trump becomes severely ill, he may temporarily transfer power to the vice-president under the 25th Amendment of the US constitution – and reclaim authority when he deems himself fit to serve. If both Trump and Pence are incapacitated, the House speaker, Nancy Pelosi, would be next in the line of succession.

News of Hicks’ infection has intensified criticism of the administration’s handling of the coronavirus pandemic, and the president’s disregard for public officials’ recommendations.

Trump routinely eschews face masks to protect against the spread of Covid-19 and has recently been holding large rallies crowded with unmasked supporters. Although many of the large events have been outdoors, where the virus is less likely to be transmitted, he has also hosted indoor events in Arizona and Nevada. A public health official in Tulsa has linked a Trump rally there with an increase in Covid-19 cases.‎

The virus has killed more than 200,000 Americans and infected more than 7 million people nationwide. Hours before he tested positive for the virus, Trump, as he has often done, claimed without evidence that the pandemic would subside soon. “I just want to say that the end of the pandemic is in sight,” he said in prerecorded remarks.

With 33 days remaining until the election, Trump’s diagnosis means he will have to withdraw from the campaign trail. If he develops serious symptoms, the president will have to explain why he continually downplayed the severity of the pandemic and pushed communities to reopen schools and businesses over the concerns of epidemiologists.

Hicks is the closest aide to Trump to test positive so far. She has travelled with the president several times this week, including on Marine One, the presidential helicopter, for a Minnesota rally on Wednesday, and on Air Force One to Tuesday night’s presidential debate.

Hicks is not the only White House staffer to have contracted the virus. Katie Miller, the vice-president’s press secretary, who is married to Trump’s adviser Stephen Miller, has recovered from Covid-19. One of Trump’s personal valets also tested positive for coronavirus, in May. Herman Cain, a Trump ally and campaign surrogate, died of the coronavirus in July after attending a rally in Tulsa.

Mike Pence said he and his wife “send our love and prayers to our dear friends”, the president and the first lady. “We join millions across America praying for their full and swift recovery. God bless you President Trump and our wonderful first lady Melania,” he wrote on Twitter.

‎Hicks previously served as White House communications director and rejoined the administration this year ahead of the election. Her positive test was first reported byBloomberg News. Other news outlets, including the Washington Post and the New York Times, also confirmed the news on Thursday evening.