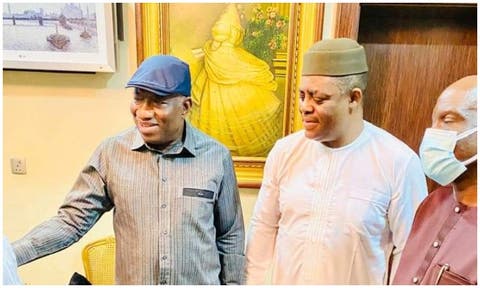 In what is believed to be a desperate bid to douse the tension created by his recent romance with APC leaders, former Minister of Aviation, Femi Fani-Kayode, on Tuesday evening, visited former President Goodluck Jonathan in his Abuja residence.

“My team and I had the honour and privilege of spending a wonderful evening with President Goodluck Jonathan in his Abuja home last night. None like him,” the minister tweeted on Wednesday without revealing details of the meeting.

Fani-Kayode’s visit to Jonathan followed his meeting with All Progressives Congress stalwarts including the party’s Caretaker Chairman, Mai Mala Buni; and Kogi State Governor, Yahaya Bello, in Abuja.
After the meeting on Monday, photos of Fani-Kayode, a member of the opposition Peoples Democratic Party, discussing with the APC bigwigs surfaced online.
The development sparked defection reports that the PDP chieftain may be on his way to the ruling APC.

But, a source close to the minister said that while it was true that the party leadership has reached out to Fani-Kayode, the former minister had not yet made any commitment.
He said, “Fani-Kayode met with Yahaya Bello and Buni on Sunday for two hours. It is all about politics of 2023 and the recent registration drive of the APC.

“Fani-Kayode has not made any commitment yet but discussions are still ongoing.”
The source also said the APC had begun talks with four PDP governors with the aim of getting them to defect to the ruling party ahead of the 2023 general elections.

However, many members of the APC including Bashir Ahmad, an aide to the President, Major General Muhammadu Buhari (retd.); the Director-General of the Progressives Governors Forum, Salihu Lukman; amongst others have cautioned the APC against admitting the former minister into the party.