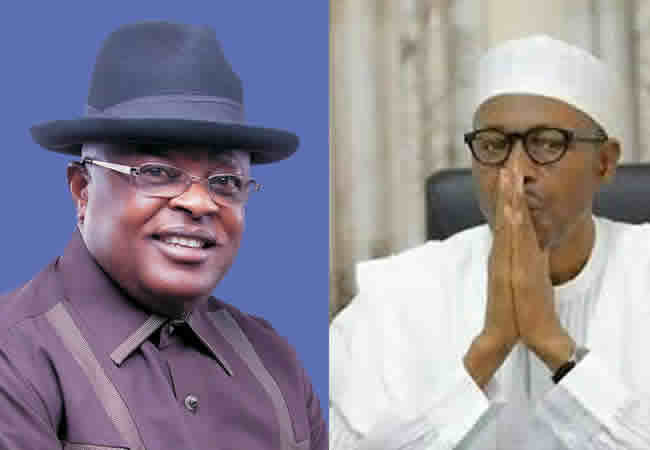 Ebonyi State Governor, Engr. Dave Umahi on Friday expressed his opposition to calls for the sack of the Service Chiefs.

The National Assembly has recently called for the sack of the service chiefs in vew of the worsening security situation in the country. Different groups including the Nigeria Governors’ Forum (NGF) had equally expressed concern over the security situation.

But, speaking during the Ground Breaking Ceremony of Nigeria Army Reference Hospital, Abakaliki, Governor Umahi asked the president not to contemplate relieving the security chiefs their appointment, insisting that the president should provide more funds and logistics to them.

He specifically commended the Nigerian Army for their efforts so far in defending the nation against external aggression, noting that the army had demonstrated high level of gallantry and commitment to their duties.

He further appealed to Nigerians to give the army and indeed other security agencies the much needed support, explaining that the job of security required collective responsibility.

“The Chief of Army Staff needs cooperation and information so that they can do their work. We should increase the funding and logistics of the Army to aid their performance, rather than changing them. They should increase their funding. The Army is very crucial for the Nigerian people.

“Let me thank the President for finding Ebonyi fit to site this project. Ebonyi is very lucky with the Army. We will continue to partner you. we expect him, the Chief of Army Staff to Commission the internal roads we did for the Army.

“The new GOC is more like a brother. We want to thank you and appreciate you for being an Ebonyi man. Thanks for choosing this State for this project.”

The Chief of Army Staff, Lt Gen Tukur Yusuf Buratai had in his remarks reaffirmed the commitment of the Nigerian Army in the fight against insurgency, insisting that it remains a battle that they must win.

“The new Hospital will provide effective and efficient health care delivery to the people of the Southeast. it will provide medical care of our soldiers. It is a 200-bed capacity hospital to handle healthcare for our troops and the Nigerian populace in Cross River, Benue and south-east and South-South. It will take care of our troops and host communities.

“I am particularly happy that we can make it here despite the pandemic. We have made remarkable progress against insurgency and other forms of criminality.”