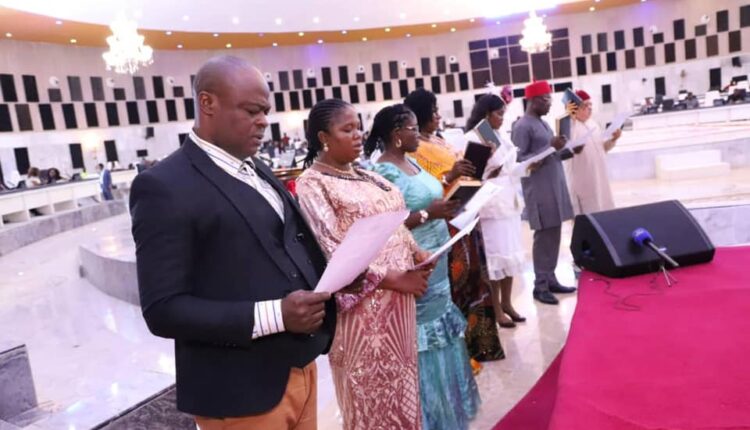 Umahi swears in members of revenue appeal commission, SUBEB, others

Governor Dave Umahi of Ebonyi State has sworn in new members of the Revenue Appeal Commission, Secondary Education Board, and Universal Basic Education Board.
The swearing-in ceremony took place at the Executive Council Chambers, Ochoudo Centenary City Abakaliki on Tuesday.
This was disclosed in a statement issued by the Special Assistant to the Governor on Media on Publicity, Francis Nwaeze on Wednesday.
Addressing the Appointees, Umahi who spoke through the Honourable Attorney General and Commissioner for Justice, Chief Cletus Ofoke charged the appointees not to see their appointment as political patronage but a call to service for the continued transformation of the State.

Earlier, the Honourable Attorney General and Commissioner for Justice, Chief Cletus Ofoke said the appointments followed due process and were necessary to fill vacancies in the Boards and Commission.
On behalf of the appointees, the Secretary of Revenue Appeal Commission, Right Honourable Ikechukwu Nwankwo thanked the Governor for finding them worthy to serve and assured of their determination to deliver on their assignment.