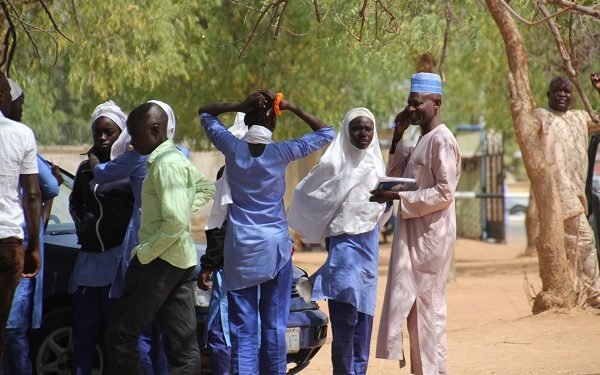 Apparently not wanting to leave anything to chance, the Yobe State Government on Sunday directed the closure and immediate evacuation of students in all boarding schools.
The order came following security reports Boko Haram insurgents are lurking around the state capital with plans to lunch an attack and kidnap some students

It was however gathered that the vacation orders did not include SS 3 students.
Our correspondent, who visited Government Girls College Damaturu, saw many girls stranded on the school compound with others calling up their parents or guardians to come over and pick them up.

Government Girls College Damaturu is also accommodating a girls’ schools from Buni Gari which was relocated to Damaturu because of the insecurity in the area.
Investigation revealed that security operatives last night stationed an armored personal carriers at the gate of the school to curtail any breach of security at the school.
Commissioner for Basic and Secondary Education in the State, Dr. Sani Idris did not respond to the calls and text messages on the issue.
No statement has yet been issued from the security operatives in the state to that effect as at the time of filing this report.
Some teachers not authorised to speak told The Nation that the notice also came as a surprise to them.

Kidnapped Jangebe schoolgirls yet to be rescued says Zamfara Govt.