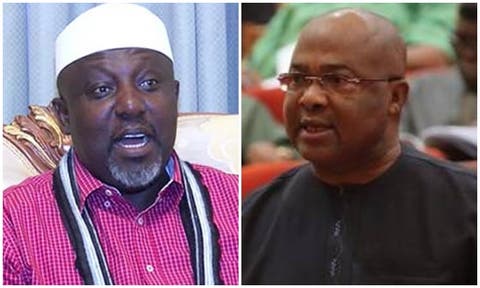 Forty-hours after a major altercation that led to the arrest of his predecessor, Senator Rochas Okorocha by the police, Governor Hope Uzodinma of Imo State said on Tuesday that he has no personal issues with the former governor.

The Governor said his administration was only implementing the recommendations made by a committee set up by a former governor, Emeka Ihedioha.

The governor who addressed newsmen shortly after a meeting with President Muhammadu Buhari at the Presidential Villa, Abuja also justified the recent military invasion of Orlu District in Orlu Local Government Area of his state despite the criticisms that trailed the operation, saying the measure was meant to deal with suspected criminals.

On the disagreement between him and his predecessor, Rochas Okorocha, the governor said it was nothing personal.

He said he did not know anything about Okorocha’s claim that there is a plan to assassinate him.

“Who will assassinate him? I don’t know about any attempt to assassinate Okorocha. Rather, what I know is that I have no personal issues with him.
“You will recall that before I became the governor, the Ihedioha administration set up a judicial panel of inquiry to look into acquisition and allegations of lands, converting government lands to personal property, and then removing private lands from individuals and giving to other individuals.
“The judicial panel of inquiry chaired by a judge met and concluded its job. A White Paper has since been produced.

“Institutions and agencies that are involved with implementation are doing their job.”
He accused Okorocha of going to unseal one of the properties sealed by the government, and in the process, injured policemen and officials of the Nigeria Civil Defence Corps.
He said he was not directly involved in the issue

READ  BREAKING: Use your rifles to defend yourselves against IPOB members, Uzodinma tells cops

“I don’t want to go into that matter because government is a serious business, and I am very serious.

“I don’t have enough time to run the affairs of the state. But people should know the difference between being a governor and the government’s decisions and policies.
“We took oath to protect the rule of law, to protect our laws, and we shouldn’t be part of any arrangement to violate our laws,” Uzodinma said.

On the invasion of Orlu by the military, Uzodinma said he sought the intervention of the Federal Government to tackle security challenges in the area and the intervention came in form of deployment of more policemen and soldiers.

A reporter had sought to know why the governor decided to unleash the military on his people at a time his counterparts in the Northern part of the country are negotiating with bandits to resolve their security challenges.

The governor responded, “On the issue of bringing the military to Imo State, you will recall that during the EndSARS protests, a lot of properties were damaged in the state; police stations were burnt down, soldiers were killed, their rifles removed from them.

“Immediately after the EndSARS, we thought it was over. Then, issues of kidnapping came up. A Catholic bishop was kidnapped. And these militants came out and started shooting. We have lost lives; market women were killed; old women were raped in Orlu area of Imo state and they visited this serious terror on the citizenry.

“Then, I came here and pleaded with Mr President for his support and he sent additional support by sending in police and the military. That is where we are. It was at my invitation that the military came.
“I did that because I know the situation was beyond the local arrangement, we needed help. And the help was given to us. As I speak to you, the situation has come down to normal. People are now going about their business.

“Those caught will soon be charged to court. And all those military rifles from the army, the police, AK 47, and so on, were recovered by the people that came. We as a government have the responsibility to protect lives. And while we have the Nigerian Army, Nigerian police, and security challenges, we invite them to go to work.”
Uzodinma said as the governor of the state, he has the responsibility to protect the lives of his people.

He ruled out the possibility of negotiating with criminals in his state.

“The Federal Government may be negotiating with the Boko Haram, but God knows that if I have the opportunity to see any man who is taking lives, I will confront the person head on. That is why we are government,” he said.
He said the purpose of his latest meeting with the President was to inform him about the progress on the effort to tackle insecurity.