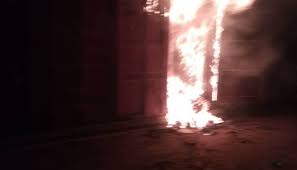 Barely one month to the governorship election in the state, the Ondo office of the Independent National Electoral Commission (INEC) was on Thursday gutted by fire.

Though the cause of the fire incident was not clear as at press time, but sources in the commission said some important documents were razed. It was also discovered that card readers were destroyed in the raging inferno.

When newsmen visited the scene, security operatives had cordoned off the vicinity in a bid to ward off people from possibly getting details of the extent of damage.

The Resident Electoral Commissioner of the state, Dr Rufus Akeju, could not be reached as of the time of filing this report.

However, a staff of the commission who spoke on ground of anonymity said nothing much was damaged.

He also allayed fears within political circles that the fire could affect the forthcoming October 10 election in the state.