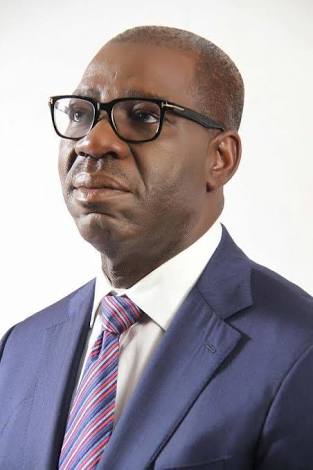 The Edo State Governor, Mr. Godwin Obaseki, has urged the Revenue Mobilisation, Allocation and Fiscal Commission (RMAFC) to review the present revenue allocation formula that would reflect the present and changing economic realities amid fiscal challenges faced by states in the  wake of the coronavirus (COVID-19) economy.
Obaseki gave the charge on Thursday when he received the Federal Commissioner of the  Revenue Mobilisation Allocation and Fiscal Commission, Alhaji Mohammed Kabir Usman and other members of the team on a courtesy visit at the Government House, Benin City.
Obaseki said: “Even as a state, we find ourselves under pressure as almost all federal agencies operating in the state rely on our support. It looks like it is only the salary of its staff that the Federal Government pays, while other operational logistics and expenses are shouldered by the state and the revenue allocation formula remains the same.
“I am happy you are in Edo and on your own, appreciate and understand the need to introduce more transparent ways of gathering data and information, which is the basis for determining the indicators for this allocation.
“We cannot continue this way especially due to some responsibilities borne by the state government. When local governments are in trouble, the states have to intervene. In Edo State, there are two local governments that we have to continue to give bail out.
“We believe in running an open government and urge you as a body to review the indicators, focusing on achieving objective data that will help the body make positive decisions as it affects revenue allocation for local governments and states.”
“Shortly, you will join us as we put pressure to ensure that the basis of revenue allocation, whether vertical or horizontal allocation is reviewed. It is almost two decades since it was done and things have changed radically,” the governor noted.
Obaseki further added: “With the readjustment of the economy as a result of COVID-19, we are facing major difficulties as internal revenue has come down, particularly the local government. We had started to reform their revenue base and were doing well until COVID-19 surfaced in March this year. This is important for us.”
On his part, Usman thanked the governor for receiving his team, adding: “We are here in the state, a team of twelve people on a sensitisation and advocacy tour, which is the first of its kind.
“The Constitution empowers the Commission to determine the revenue sharing formula among the various stakeholders, that is, Federal, State and Local Government, from time to time. It also has the power to determine the salaries and allowances of all political, judicial and public officers of the federation.”