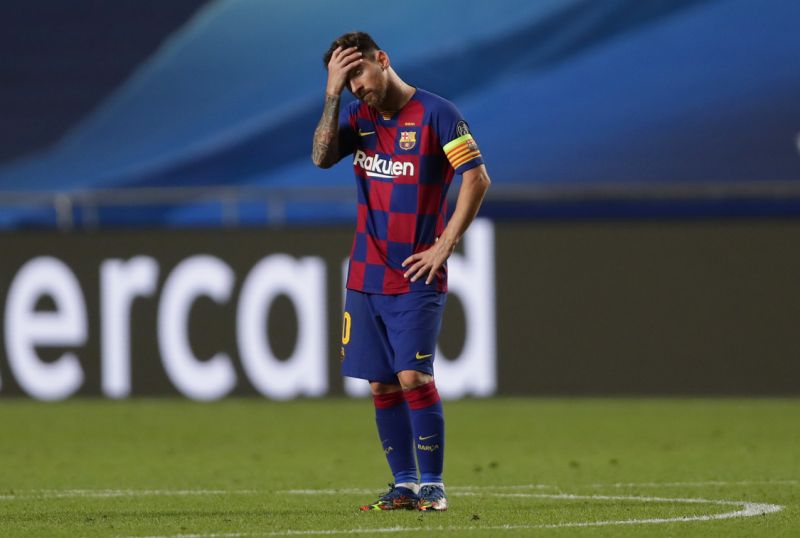 ‎Lionel Messi has told Barcelona via fax that he wants to leave the club on a free transfer this summer.

The incredible development potentially puts the 33-year-old within reach of a dramatic move to Manchester City and a reunion with Pep Guardiola… but they aren’t the only club likely to be vying for his signature.

With Manchester United, PSG, Inter Milan and Juventus also showing interest, Sportsmail have looked at the favourites to land Messi this summer.

The links with the Etihad Stadium just simply will not go away.

The ongoing coronavirus pandemic means these are testing financial times for all football clubs but, when it really comes down to it, City have all the money they need.

Recently coming out victorious from their CAS appeal against UEFA’s claims of Financial Fair Play breaches, City will feel more confident than ever before in their model of operation.

Pulling off the signing of Messi, however, would be bigger than anything that has gone before. An obvious lure comes in the form of boss Pep Guardiola, who honed Messi into the finest footballer on the continent, along with Cristiano Ronaldo, and built his great Barca side around him.

Still, City would require a way around the astronomical buy-out fee to keep the books balanced and would rely on Barca accepting a reduced bid this summer. Or wait until January to negotiate openly with Messi.

Thereafter, however, City could still comfortably meet Messi’s mammoth annual wages and ensure he is still the most well-paid footballer in the world.

Most European clubs have been borderline silent when it comes to the subject of Messi… except Inter.

Over at the San Siro, Messi’s name is on the lips of everybody, and his image was even beamed onto the Milan’s iconic Duomo cathedral towards the end of the season by Inter’s Chinese owners. (They claimed this was to promote coverage of their side’s fixture with Napoli, though it all seems rather convenient.)

As recently as last week former Inter director Massimiliano Mirabelli made the admission that a long-term plan to acquire Messi has been in the pipeline for several years, and was something the club’s owners identified in their very first meeting.

Inter appear the most likely side to tempt Barca with a bid this summer and, is it important to note, that while the Spanish giants have refused to sell, this is the last window in which they can receive a fee for their talisman.

Preferably, of course, Inter would want to take Messi on as a free agent and it has been speculated that long-time sponsors Pirelli would help to make up the player’s huge wages with a series of added incentives.

PSG have a track record when it comes to audaciously taking prized jewels from Barcelona.

It is fair to say the relationship between the two clubs has been non-existent ever since the bad blood of the Neymar saga.

While they already don’t want to lose Messi, Barca would fight tooth and nail to ensure PSG do not get their hands on the Argentine.

Interestingly, the Parisians could offer Neymar as part of a complex switch, though no murmurs have left the Parc des Princes suggesting that this is even being considered as a possibility.

Juve shocked the world when they moved swiftly to get Cristiano Ronaldo out of Real Madrid, so surely they could not be looking to pull this off again with Messi?

The reigning Serie A champions are rank outsiders when it comes to Messi’s possible destination, but have shown the nous and know-how to get a huge deal done.

Recent reports in Spain sensationally suggested Juve had even made contact with Barca to offer Ronaldo, in order to clear his hefty £28m annual earnings from their wage bill.

Such talk was dismissed by the club, though all indications are that Juve are cutting back on their spending prowess and looking to invest in the future under an energetic new manager in Andrea Pirlo.

While Messi naturally appeals, the fact he turns 34 next June does not.

When it comes to financial rivalry United can certainly wield their might alongside their wealthy neighbours.

Whether United are interested in Messi or not, they will be linked with the superstar purely due to their status as one of the few sides who could realistically package a deal together.

From a marketing perspective this would be a dream, given that Messi personally has a global fan base which exceeds that of most Premier League teams.

He would, of course, also propel United back into Premier League and European contention and ensure the eyes of the world are glued to Old Trafford week-in, week-out.

All that said, his age, 33, simply does not fit into United’s new ways of doing things. Too many times in recent years have the Red Devils been burnt by offering lucrative deals to ageing stars.

Players in Ole Gunnar Solkskjaer’s match-day squads now average around 25 years old, and that looks set to be the benchmark heading into the future.

As with China, a move to the United States would represent a huge compromise by Messi on his standing in the football world.

While it would be the biggest coup in the history of American soccer, with a host of teams rapidly crunching the numbers to work out if a deal is possible, it appears to be a non-starter.

The quality of living may well appeal to Messi much more, with the option of living in one of the USA’s most glamorous cities with possibly a greater degree of anonymity than he would be afforded in Europe.

Still, if this one was to happen, it would likely occur several years down the line.