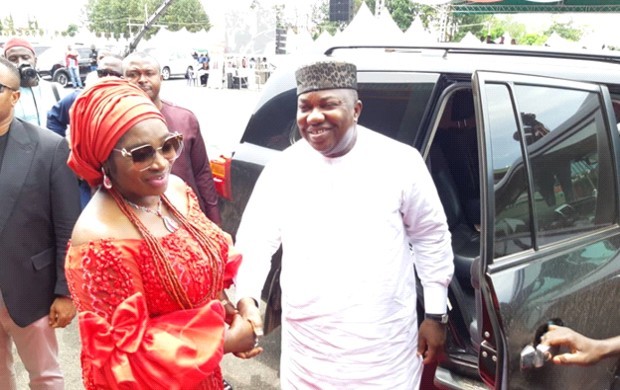 The 9th National Assembly has commended Governor Ifeanyi Ugwuanyi of Enugu State, for his giant strides in infrastructural development with the state’s lean resources, as well as the qualitative leadership he has been providing for the people of the state.

Speaking when members of the Senate Committee on Science and Technology paid a courtesy call on Gov. Ugwuanyi, at the Government House, Enugu, on Wednesday, the committee chairman, Senator Dr. (Mrs.) Uche Ekwunife, told the governor that “my committee and the Senate President have asked us to first of all thank you for being a good ambassador of the National Assembly by the way and manner you are serving the people of Enugu State despite the fact that you are having very lean resources”.

The chairman added that the National Assembly is impressed that the governor has been able to provide the needed qualitative leadership in terms of peace and good governance.

“So, on behalf of the Senate President and the National Assembly, I want to commend you on that and inform you that we are all celebrating you in Abuja. You have shown us that a product of National Assembly can be one of the best governors we have in Nigeria today and actually in Africa”, she said.

Sen. Ekwunife informed Gov. Ugwuanyi that the committee was in Enugu State, for an oversight function in all the National Board for Technology Incubation (NBTI) centres in the South East geopolitical zone, with the aim to promote, facilitate and actualize the set objectives of the agency.

While stressing the need for enhanced partnership between state/local government governments and the agency in nurturing and growing technology-based enterprises for entrepreneurs to develop their businesses, the committee chairman thanked the governor for the support his administration has given so far.

She requested him to continue to further his administration’s support to the Technology Incubation Centre in Enugu State, to serve as a veritable platform for the government to create more employment for the teeming youth and women, as well as “get our restive youths to be sufficiently self reliant in creating wealth”.

Welcoming the committee members to the Government House, Enugu, Gov. Ugwuanyi, who applauded their initiative and sufficient interest in the Technology Incubation Programme, with regard to “its potentials for accelerating Small and Medium Enterprises (SME) development with its attendant benefits”, reassured them that his administration will partner the Technology Incubation Centre in Enugu.

“While wishing you a memorable Coal City experience, I urge you to lead the high level advocacy and inspire the necessary legislative action for optimizing the benefits of Technology Incubation Programme for employment and wealth creation for Nigerians”, the governor said.

Obaseki has a responsive governance system in place – Osagie