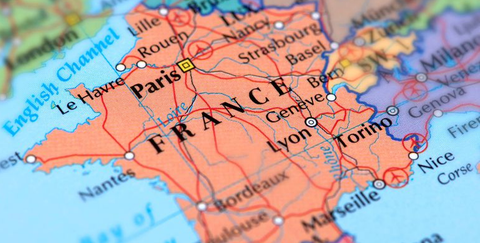 French police have arrested nine people over the beheading of a teacher near his school in a Paris suburb, a judicial source said on Saturday, in what President Emmanuel Macron labeled an Islamist terror attack.

The source said the killing was carried out by an 18-year-old Chechen, who was then shot and killed by police near the scene in Conflans-Sainte-Honorine, northwest of Paris.

Police said the victim was 47-year-old history teacher Samuel Paty, who had shown his pupils some cartoons of the Prophet Mohammed as part of a class discussion on freedom of expression — a lesson that had prompted complaints from parents.

Two of the suspect’s brothers and his grandparents were initially detained by police for questioning.
The judicial source told AFP Saturday that five more people had been detained, including the parents of a child at the school and friends of the suspect.
According to the source, the parents had signaled their disagreement with the teacher’s decision to show the cartoons.
The attack came as a trial is in progress over the January 2015 massacre at the offices of the Charlie Hebdo satirical magazine, which had published caricatures of the prophet Mohammed that unleashed a wave of anger across the Islamic world.

The magazine republished the cartoons in the run-up to the trial in September and last month a young Pakistani man wounded two people with a meat cleaver outside its former offices.
– ‘Will not win’ –
Documents found on the beheading suspect showed he was an 18-year-old born in Moscow but from Russia’s southern region of Chechnya.
The attacker shouted “Allahu Akbar” (“God is greatest”) as police confronted him, a cry often heard in jihadist attacks, a police source said.

There had been no previous indication that he was a potentially radical, a source close to the investigation said.

French anti-terror prosecutors said they were treating the assault as “a murder linked to a terrorist organization”.
Police said they were investigating a tweet posted from an account — since shut down — that showed a picture of the teacher’s head.
It was unclear whether the message, which contained a threat against Macron described as “the leader of the infidels”, had been posted by the attacker, they said.

Visibly moved as he visited the scene, Macron said “the entire nation” stood ready to defend teachers and that “obscurantism will not win”.
His office said Saturday a “national tribute” would be held in Paty’s honor.
Prime Minister Jean Castex tweeted that teachers would continue to “awaken the critical spirit of the citizens of the republic, to emancipate them from all totalitarianism”.
EU Commission chief Ursula von der Leyen expressed her condolences saying her thoughts were with teachers in France and across Europe.

“Without them, there are no citizens. Without them, there is no democracy,” she tweeted.
The Strasbourg-based Assembly of Chechens in Europe said in a statement that “like all French people our community is horrified by this incident”.

Super friendly and kind’ –
Parents and teachers paid tribute to Paty, who was said to have been widely liked and himself a father, laying white roses outside the school and holding up placards saying “I am a teacher – Freedom of Speech”.

Martial, 16, said Paty had loved his job: “He really wanted to teach us things — sometimes we had debates.”
Another student Tiago said he saw Paty on the day he died. “He came to my class to see our teacher. It’s shocking that I won’t see him again.”
“According to my son, he was super nice, super friendly, super kind,” Nordine Chaouadi, a parent of one of Paty’s students, told AFP.

According to parents and teachers, Paty told Muslim children they could leave before he showed the cartoon, telling them he did not want their feelings hurt.
Sources said one of those detained was a father who had posted a video on social media expressing shock that cartoons showing the prophet “naked” had been shown in his daughter’s class.
In the video, the father had reportedly called Paty a “rogue” who should no longer be a teacher and called on other parents to mobilize.

Rodrigo Arenas, head of the FCPE parents’ association, said a complaint had been received from a “very agitated” father.
He said Paty had invited Muslim students to leave the room before showing the cartoons.
Virginie, 15, said Paty did this every year as part of a discussion about freedom following the Charlie Hebdo attack.
In a tweet, Charlie Hebdo expressed its “sense of horror and revolt” at Friday’s attack.

Police went to the scene after receiving a call about suspicious individual loitering near the school, a police source said.
They discovered the dead man and soon spotted the suspect, armed with a blade, who threatened the officers as they tried to arrest him.
They opened fire and he later died of gunshot wounds.
(AFP)