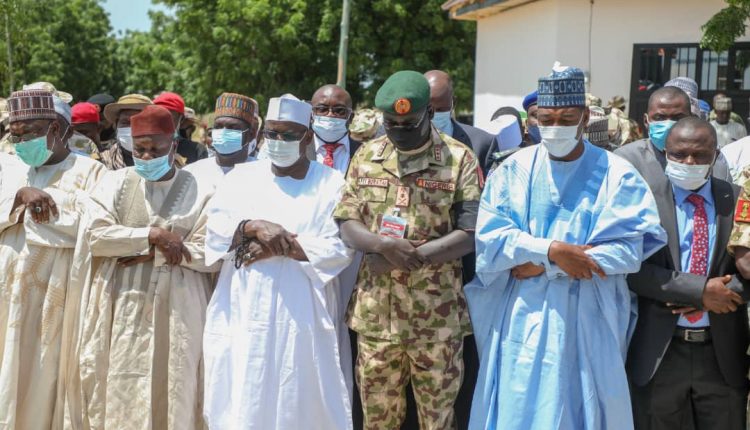 Tears and tributes rained in torrents on Tuesday during the burial of the slain Commander of the 25 Task Force Brigade of the Nigerian Army, Damboa, Col. Dahiru Bako.

Bako, who was mortally wounded in a battle with Boko Haram on Sunday, succumbed to death on Monday. 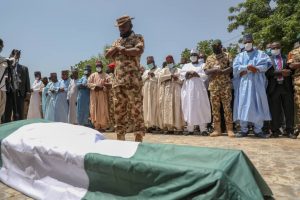 The slain Colonel was laid to rest at the the Maimalari Military Cemetery in Maiduguri amidst cries and tributes from the Army, Government and other mourners. 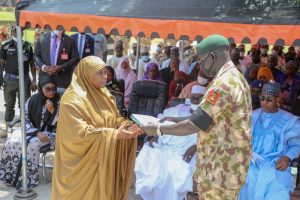 The funeral prayer was given for the reposed of his soul by the Chief Imam and he was subsequently buried according to Islamic rites.

He was buried with full military honour, including the 21-gun salute, with the funeral oration read out by the Chief of Army Staff.

Buratai, in his tribute to the gallant Officer, said he played a critical role in the counter-insurgency operations of the country.

The COAS also presented a flag to the next of kin of the deceased in line with military tradition. 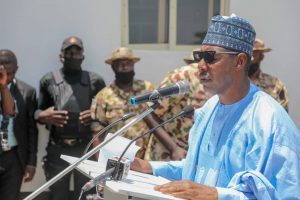 Meanwhile, Borno State Governor, Prof. Babagana Zulum has announced a donation of a house and N20 million to the widow and orphans left behind by late Colonel.

Col. Dahiru Bako who died from wounds sustained while battling Boko Haram insurgents that ambushed his troopon Sunday morning, was described by Zulum as a fallen warrior.

He said: “Indeed it is a very sad moment, this is not a loss to the family of Late Col. Dahiru Chiroma Bako alone, not to the Nigerian Military, it is a loss to Borno and indeed Nigeria.”

“Col. Bako was a gallant and dodged military officer, under whose watch Damboa was never defeated. He humble and committed in discharging his duties, he is part of the success recorded in degrading boko haram insurgency in Borno State.”

“He has been one of the greatest in trying to stabilize not only Borno but even the neighbouring Yobe State. We will remember his contributions forever, may almighty Allah reward him, and forgive him.

“To his family may they bear this irreparable lost. To all the soldiers and officers of the Nigerian Military that lost their lives, may Almighty Allah reward and forgive them. The injured ones we pray for their quck recovery.”

He said: “I am reliably informed that Col. Bako did not have a house of his own. We cannot ignore the family he left behind. We share their grief and nothing can equal his life. Nevertheless, I am pleased to announce that Borno State Government will build a befitting house for the family of late Col. Bako. I was also told that the Nigerian Army under the distinguished leadership of Lt. General Tukur Yusuf Buratai has offered a scholarship to his children, we will also support the family to compliment the efforts of the military.

“For the welfare of his family, Borno State Government will release the sum of 20 million as support for them. A cheque to the effect will be ready later today or tomorrow morning.”

Zulum also described the Commander as one who inspired his troops and led them in the frontline with exceptional courage which was clearly out of pure patriotism.

Tinubu, Oshiomhole have no constitutional role in APC… Obaseki