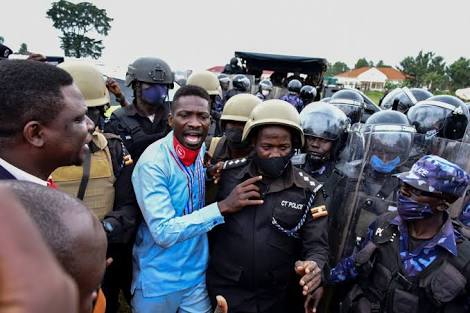 Uganda to deploy police to rooftops during poll

Police in Uganda have said that officers will be deployed to high-rise buildings in the centre of the capital, Kampala, as a security measure as voters go to the polls on Thursday.
The run-up to the election has been marred by tension and deadly violence.
Analysis of CCTV footage of the protests in November, which following the arrest of presidential candidate Bobi Wine, had shown that those commanding the protesters were operating from rooftops, a statement from the Kampala Metropolitan Police said.
On Monday, a man on the rooftop of a shopping centre had attacked security personnel on patrol with a bow and arrows, the statement added.
The man was shot and later died in hospital from his injuries.
The business community had agreed to the deployment, the police said.
Earlier this week, the security forces promised to beef up security in areas considered potential hotspots for violence.
Armoured vehicles and security personnel on foot have been seen patrolling through Kampala in recent says.
President Yoweri Museveni is seeking his sixth elected term in office after 35 years in power.
The 76-year-old faces 10 challengers, most notably 38-year-old pop star turned politician Robert Kyagulanyi, known by his stage name Bobi Wine.

Sudan to get Covid vaccines from UAE ‘soon’