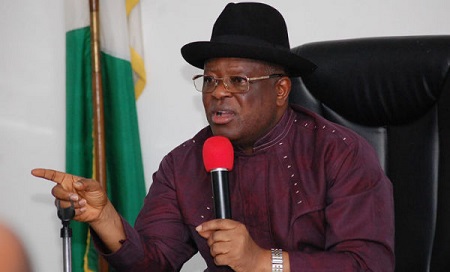 The South East Governors Forum has foreclosed the formation of a joint security network for the zone.

Chairman of the forum and Governor of Ebonyi State, Dave Umahi made the assertion on Thursday
during an interview on Channels Television’s Sunrise Daily.

He said there is no possibility for the South-East to have a joint security network in the region.
According to him, the governors in the region are comfortable with the different security architectures at various states because the personnel are working very well.

“What we have in South East states in a Joint Security Committee which trains Neighbourhood Watch and the Vigilante groups or other local security architectures at different states in the region. If anybody tells you that there could be security personnel contributed from different states to form a joint security for this region, it is not a possibility. It is not workable even if the constitution permits it.

“Every state is peculiar and so is their security challenges. The problem is that those complaining about the lack of joint security for the South-East are not living in the region. They don’t have the knowledge of how security works in the region.
“The governors of the South-East States are comfortable with the different security architectures at various states because the personnel are working very well. There is a problem of insecurity in the region, but the issue is not peculiar to the region alone, it is a national problem.

“We are happy with what our local security personnel are doing at different states. We are not God who assures 100 per cent security but we are trying our best and this what our people want,” he said.
Umahi explained that having a joint security network will have challenges in terms of deployment of personnel from one state to another which they may not be familiar with.

“Our local security architectures at different states know the terrain and the people very well and are given the opportunity to secure their environment and the people. That is the kind of arrangement we have in the South East,” he said.

Daily Tracker Jan 24, 2022 0
By Goni Abdullahi In preparation towardstheNation’s general elections, the year 2022 is expected to witness a…